The title of this post gives it away: I didn’t pass my check ride on the first try. Read on to find out why…

On day 8, I woke up early, loaded the car, and drove to the airport to meet Peter. We’d arranged with Ken to meet early because the weather from Manhattan to Topeka (and the surrounding area) was poor: 1200’ or less ceilings, with lots of wind and a good bit of rain. Peter and I agreed to head east and see what the weather looked like when we got there. Short answer: it was terrible. The entire flight was in clouds, with plenty of bumps, then on arrival, ATC gave us about 20 minutes of holding on the localizer, which was, um, invigorating, not to mention bouncy. We finally landed and this is what we saw: 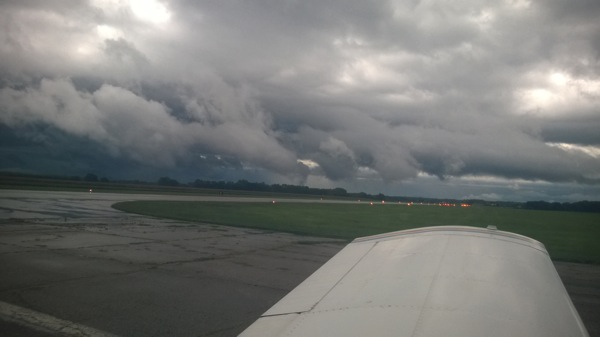 Ken was there waiting for us, so we went inside and went through the standard check ride prep; he and I both signed into IACRA to complete my check ride paperwork, he briefed me on the Pilot’s Bill of Rights, and so on. Then we spent about an hour on the oral exam, which was perfectly straightforward. I wasn’t surprised by any of his questions, largely thanks to the combination of Peter’s coaching and my own study. The weather wasn’t good enough for us to conduct the practice approaches on the check ride under VFR conditions, so we adjourned to the airport restaurant for a snack (which was interrupted by a business phone call for me, alas). After about an hour and a half, the weather had lifted enough for us to fly. We took off, and Ken had me intercept V4 to give us some distance from the airport. We flew west a bit, then he had me recover from unusual attitudes, which went well… except.

See, I was having a hell of a time keeping to my assigned altitude. I’d like to blame it on the wind, but it wasn’t just that; my scan was deteriorating faster than ever before. I’m still not sure if I was nervous, rattled from the weather, or what, but after a few gentle reminders from Ken (example: “Do you know what the PTS requirements for holding altitude are?”, just in case my poor performance was due to ignorance vice lack of skill), he had me head in to the ILS for runway 13. I flew fairly well despite the wind gusts, intercepting and tracking the localizer without a problem.. but, again, my altitude control was poor, and I let the glideslope needle hit full deflection down. I was too high, and that was that: he had me land, gave me the dreaded letter of discontinuance, and held a short debrief with Peter and me. Then I flew us home, in a funk the whole way; we did some remedial training en route, which I obviously needed but didn’t want. After landing I went back to the apartment, sulked for a while, worked a bit, and then mentally steeled myself to repeat the process the next day… and that’s exactly what happened. The next morning, we went back to the airport, flew to Topeka, met Ken, did the same IACRA stuff, and went out to the airplane.

When you retake a failed (or interrupted) checkride, the examiner doesn’t have to retest you on the portions you passed, although she can. In my case, Ken just wanted me to fly the approaches and holds, which I did, starting with the ILS for 13. It was still breezy, but nowhere near as windy as the preceding day, and/or maybe I was less nervous. In any event, I flew a textbook ILS approach, did a decent job on the hold (despite a stiff and inconvenient crosswind), and followed with the VOR and localizer back course approaches. I landed, taxied in, and Ken shook my hand to congratulate me. Here’s what the airport looked like when we taxied up: 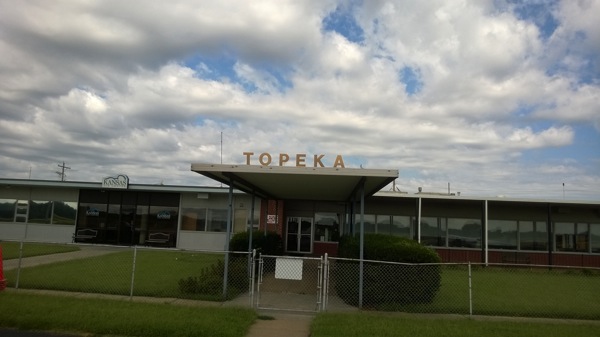 After another debrief, in which the often-heard and completely true phrase “license to learn” was tossed around several times, we bade Ken goodbye and headed back to the ramp. After a short and uneventful flight back to Manhattan, I shook hands with Peter for the last time, got a fresh diet Coke, and headed home. The flight home was smooth and clear, so I didn’t actually get to perform any approaches, more’s the pity. After such a long time away, I was delighted to get home, sleep in my own bed, play with the cat, and generally settle in a bit.

Once a little more time has passed, I’ll write up my overall impressions of GATTS. It is safe to say that I’m pleased with what I learned and their teaching methods, but I feel like I need a bit more experience before I form a complete opinion. Meanwhile, I’ll be flying!