Last year, I was delusional… I thought it would be a good idea to sign up for two races on consecutive days in order to qualify for the coveted 35.1 Challenge swag. To qualify, all I’d have to do is complete a duathlon on Saturday and a half-marathon the next day. Seemed simple enough from the comfort of my couch in October, so I signed up. The two goal races were the Heel & Crank duathlon and the Bridge Street Half Marathon.

Side note: biathlon is the cool Olympic sport where you ski and then stop every so often to shoot at targets. Duathlon is what triathletes call a run/bike/run event, as opposed to an aquabike (self-explanatory, that).

Fast forward to late March. I’d been training for the Bridge Street Half and the running was just wrecking my calves and Achilles tendons. I reluctantly decided to skip Heel & Crank. Thus it was that I went to volunteer at packet pickup for the half-marathon. “As long as I’m here I’ll pick up my Heel & Crank packet,” I thought. When I opened it, this is what I found:

Through pure luck and/or overeagerness in registering, I’d scored race number 1. At that point I felt obligated to run the race, so.. I did.

The weather race morning could not have been better: clear and cool. The H&C course has changed a bit over the last few years; what hasn’t changed is that the start is in historic Mooresville (site of Alabama’s first post office, among other things). This year the run was an out-and-back on a hard-packed dirt road that was somewhat muddy after recent rains. I wore my trail shoes, so that wasn’t going to be a problem. The bike course was a loop around some lesser-traveled Limestone County roads. Part of the course covers territory I’d ridden before on the weekly Jetplex group rides, so I knew that apart from a few gentle rollers there wasn’t much to worry about.

My plan was to hold a slow pace for all 3 events– just hang in there and finish without doing too much damage to my chances of finishing the next day’s half. I got set up in transition, lined up for the start, and ran the first 5K in just under 31 min– a comfortable pace, although my calves were complaining after about the first mile. I had a leisurely transition to the bike and rode well, but with uneven cadence, for almost exactly an hour. There was a stiff wind from the west for most of the race, which helped going out but hurt coming back in. Overall, though, the flatness of the course worked in my favor. 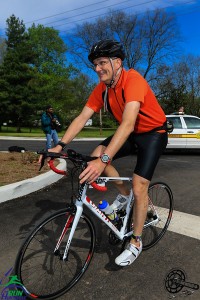 Surprisingly, on the second run I was able to maintain a 10:44/mi pace, which was faster than I expected given that I was planning on taking it realllly easy.

I finished in 2:07:29, which was barely acceptable to me considering that I was going slowly on purpose– it was still frustrating to notch a low finish though. The excellent post-race setup took some of the sting out, though; the organizers had provided not only the traditional pizza and fruit, but also pancakes and beer from a local craft brewery. It was delightful to munch and talk with my local friends, standing in the warm sunshine while the sweat dried. Thus fortified, I went home to get all my real running stuff together and get ready for the next day’s half-marathon….