I spent the rest of Saturday relaxing and resting my sore legs after Heel & Crank. I also was battling a bad case of bubbleguts– cramps and gas sufficient to clear out the room. At first I thought it was because of a new endurance supplement I’d used during the race; it’s made with waxy maize and I thought maybe that was the problem (and maybe it was, but I now think it had much more to do with what I ate post-race, as I’ve had similar symptoms after drinking post-race beer elsewhere). I took some Advil and SportsLegs, washed them down with diet Coke, and made sure I had all my race stuff ready. Of course, that’s much easier for a running-only race– I needed my headphones, race belt, shirt, shorts, shoes, socks, and runderwear… oh, and BodyGlide, the endurance athlete’s best friend. If you’re not familiar with BodyGlide, think of it like WD-40 for your body– put some on the neck of your wetsuit, the seams of your bike shorts, or any place else you want to reduce friction during repetitive motion.

Anyway, I gathered up all my stuff and Dana drove us to Bridge Street– she graciously decided to volunteer at the food tent. I got there just as my training group was assembling for a group photo, so I spent a very pleasant few minutes chatting with my running pals and trying to ignore my normal pre-race jitters. Today’s jitters were more intense than usual; my most recent long run was only 10 miles, and it was nearly a month before, so I was concerned that I would have problems hitting the distance.

Most runners set goal times for big races. At first, I did the same for this race; I wanted to set an aggressive goal, but I decided it would be better for me just to enjoy the race, since it was my first, and work on goals later. Accordingly, I decided to run with the 2:15 pace group. If you’re not familiar with distance running, you might not know that at most races there are volunteer runners who hold a steady pace throughout the race, often carrying signs. Running a marathon or half at a given speed thus becomes a matter of finding your pace group and sticking with them.

The weather was perfect: clear and cool, with a few clouds. Bridge Street is known for being a flat, fast course. Because it winds around Research Park, the scenery isn’t much to behold unless you like big office parks.However, I had a blast on the race– I sustained the pace I wanted, my legs were a little sore but not terribly so, and I was able to enjoy brief chats with a number of my running friends as the course went on.

Having said that: two+ hours is a long time to run. I don’t think I have much ambition to do a marathon.

The course finish took us up Explorer along the route where I normally finish my Thursday Panera runs, which was fun and familiar. We ran past the entryway of the Westin, along the eastern boundary of the mall area, and then took a convoluted path to finish on the titular bridge– but whoever laid out the race course had a pace sign well before the bridge, along with a balloon arch, so I started my kick a little too early and then was surprised by how far away the finish line actually was. I’ll remember that for next time.

Thanks to the excellent steady pacing of Dennis, Carrie, and Tom, I finished in 2:15:09. I got my medal, stuck around to chat with Alex and other friends as they finished, then raided the food tent to relieve Dana of some of her goodies. Along the way, I also had a chance to take a picture with Deena Kastor, three-time Olympian and record holder in both the marathon and half-marathon. (That sets my personal pace to meeting one Olympic medalist every 29 years, so check back with me in 2044.) 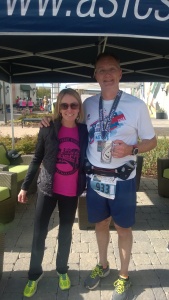 After the race wound down, I had a light lunch…. ahhh, who am I kidding? I ate approximately 25 lbs of food.

And, of course, once I got home, it was time to enjoy the fruits of my labor: the coveted 35.1 challenge mug, filled with one of my favorite beers. And some Advil. 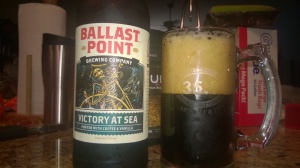 All in all, it was a great experience, although I don’t plan on running any more races of this distance during triathlon season. In the fall, maybe, after the season’s closed out, I’ll consider it, but for now it’s back to the 5K / 10K distances I’m more accustomed to.