In which I become a repeat offender

Yesterday marked a milestone: my second triathlon, the Tarpon Tri in Houma, Louisiana. I was fooling around one day on TriFind and noticed that there was a race there, so I signed up– I thought it would be a fun trip to see family and visit my hometown again. But you know what they say: one triathlon and you can explain it away as harmless experimentation, or perhaps a temporary indiscretion… run TWO, though, and you’re a repeat offender, well on your way to “serial triathlete” status.

I’d planned to make the 359nm flight from Decatur to Houma on Friday afternoon, so after a great conference call with a potential new customer (more on that next week, I hope), I loaded up the plane. With the two rear seats removed, it was easy to fit my giant road bike, my tri bag, and backpack in; I parked the car and off I went. I’d like to say a lot of neat stuff about how interesting the flight was, but the fact is that it went flawlessly: no major weather, a smooth ride, and some really interesting scenery, including a beautiful crossing of Lake Ponchartrain right alongside the Causeway. After an easy landing, I headed to my hotel to drop off my stuff, plug in all my gadgets, and make plans to see family.

(Side note: I cannot possibly say enough good things about how well the folks at Butler Aviation took care of me. When I arrived, they had a rental vehicle ready because I’d emailed ahead– no mean feat since the nearest rental agency is 10 mi or so away.  When I got ready to come home, the plane was fueled and ready to go, and everyone there was super friendly. Highly recommended.)

Dinner Friday night was excellent: my Aunt Norma, my cousin Ricky, and his wife Tonya went to Dave’s Cajun Kitchen. The name gives it away, of course: it’s Cajun food, but the kind that people actually eat. Gumbo, fried catfish, white and red beans, jambalaya, and so on. I have never had a meal there that was less than excellent. This one was so good that I ate more than I should have, for which I would pay later.

After a visit back to Ricky’s, I headed to the hotel, got my gear ready for the morning, and went to sleep… then spent all night having reflux-y burps of white beans and catfish. Key learning #1: don’t eat so damn much before the next race.

Saturday morning I got up, hit Walgreen’s for some Tums, and headed to the race site for packet pickup. The place was packed! I should’ve gone to get my packet Friday night; after 20 minutes or so in line, I got my packet and chip, got body marked, and headed to set up in transition. Thanks to all the practice with the TRI101 coaches, I had no trouble getting my gear laid out, so I headed to the pool to get in a quick warmup.

This race had staggered pool starts: the fastest swim time was #1, the second-fastest was #2, and so on. If you didn’t put down a swim time, as I didn’t, you went to the back… so I ended up being #180, meaning that I had about a 35-minute wait to get in the water. Key learning #2: put down the right swim time. I had a very pleasant time visiting with the triathletes in line near me, including a multiple half-Ironman finisher and a guy who was running his first race to celebrate his birthday weekend (he didn’t say what birthday but he was no spring chicken!)

The timing chips are all pre-set as to when they begin your time according to the seeding chart that we give to the timing guy. Please pay attention & listen to the volunteers who are starting you. They have a list of what time each participant is to start his/her swim.

That makes me wonder if for some reason the swim times were off based on the expected time at which I was supposed to get in the water. In any event, the swim felt good. I got through T1 in a leisurely 3 minutes, partly due to my decision to try my new USMC cycling jersey as racewear. Turns out putting on a clingy bike jersey when wet is really hard– and it reminds me of key learning #3: nothing new on race day. (For reference, the fastest T1 time in my age group was 19.9 seconds!) I also forgot to grab my race belt, which turned out to be OK because we were issued number stickers for our helmet, though at first I had paranoid visions of being DQ’d for not having a visible number.

The bike course was great: flat, hot, and sweaty, just like my first girlfriend. We got a steady light rain for about the first 25 minutes I was on the bike, so the pavement was a little damp but not unmanageable. The course runs right along the bayou, so there was lotsto see: egrets, various other birds, cypress trees, and the whole nine yards. There were plenty of volunteers along the course, great course markings on the pavement, and very little traffic. I averaged 15.6mph on the bike course, for a time of 38:28, which was a little frustrating because I thought I’d be faster. I didn’t take the time to mount my Suunto on the handlebars during transition, though, so I couldn’t easily see my cadence or pace. Next race I think I’ll mount the watch during setup and just go without in the pool.

Coming back in from the bike, I got through T2 in 1:02, then headed out for the run, which was also flat. The sun was powering through the clouds by this time, giving runners the sensation of being tucked snugly in Satan’s armpit. Luckily, the organizers had planned for this: there was a water station at the half-mile mark, then again at the turnaround. I spotted a roadside portatunity (that’s a porta-potty for those of you who don’t speak the lingo) and made an emergency diversion, then got back to it. I spent a few stretch breaks walking– more than I wanted to– but still finished the run in 31:51. During the run I noticed some pain on my chest; afterwards I found about a 1/4″ cut on my nipple! I have no idea how it got there, but I bet it was because of the new jersey and/or not using BodyGlide under my HRM strap. Ouch. Key learning #4: you can never have too much BodyGlide.

Overall, I came in 13th in my age group and 96th overall, with a total time of 1:19:00.2. I would have needed to pick up about 2min to move up to the next place. My goals were to finish and to be in the top half, so I was pretty pleased. Swag-wise, I got a nifty tech shirt, a coffee mug, and a can coozie, all of which I can add to my collection.

After the race, I took Ricky and his son Seth for a sightseeing flight. The ceilings at HUM were only about 3500′ and it was drizzling, but we did a couple laps around the pattern and overflew Gulf Island Fabrication, where Ricky works. This might have been the high point of the trip, because the two of them were so clearly enjoying it. I wanted to beat the weather heading north, so after I dropped them off I immediately took off to the north. There was heavy weather directly over the New Orleans airport, which I would have overflown, so I ended up diverting well to the west to get around it. As I worked my way further north, the ADS-B weather from my Stratus showed that there were storms all along my route from about Tuscaloosa north, so I landed at Demopolis to refuel and take a short break. After that, it was a simple matter to dodge a bit (as you can see below) by flying from Demopolis towards Courtland, then turning east once past the storms. Note that the magenta line shows the GPS track, not where I actually was; I had flown well to the west to clear the tail of the storm (the red blocks near the “6nm” label). 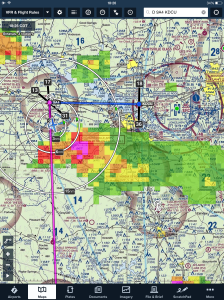 Key learning #5: datalink weather is strategic, not tactical. It isn’t updated in real-time, so you can’t use it to thread through closely spaced storm cells. The weather was gorgeous when I got to Decatur, so I landed easily, put the plane away, and headed home– with another triathlon and another 7 or so flight hours under my belt. All in all, a great trip, even if I am on my way to a life of crime triathlons.