Day 5 should be subtitled “roaring back” because it was the first day where I felt like my normal self: energetic and ready to explore. I woke up feeling rested and starving so once the rest of the posse was ready, we headed back to Parque Central for another breakfast. This time I got my 15 CUC worth.. an omelet, brioche, cheese, ham, a piece of pie, more Cuban coffee, fruit, fresh orange juice– I feel like Homer Simpson just thinking about it.

On the way there, we enjoyed a gorgeous walk up the sunlit Prado. Since it was Monday, school was in session and we saw a group of kids having their PE class, practicing the long jump. Combined with the rest of the pedestrians and tourists, this added a nice dash of energy to go along with the greenery.

We’d planned for this day to be our first real sightseeing day, and right after breakfast we set out for one of the major city landmarks: Plaza de la Revolución and the José Martí Memorial tower. The plaza is a very large open area, formerly used for massive rallies when Fidel spoke. It looked strangely empty even though there were a fair number of tourists moving around.

Opposite the memorial tower, there are large apartment buildings featuring the faces (and slogans) of Fidel, Che, and Cienfuegos. Pictured here: metal Che saying “until the final victory!”

The Martí memorial is an impressive-looking stone-clad tower with a statue of Martí at its base. The tower looks like it’s swaying when you look directly up at it, which is a little bizarre. There’s a small museum in the base of the tower, with no air conditioning and a few desultory exhibits about Martí. 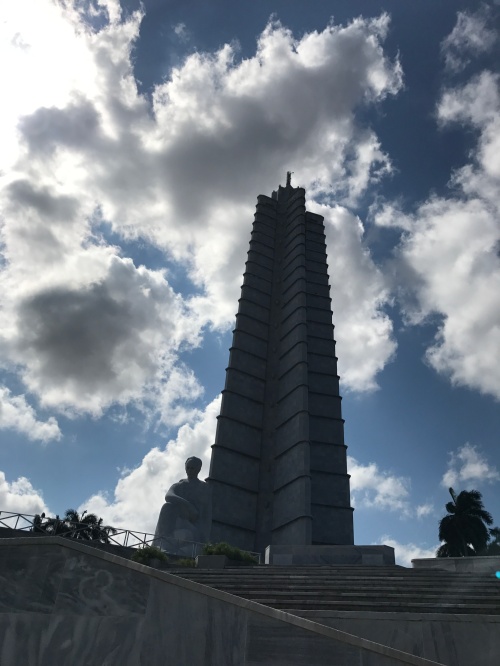 For 2 CUC you can take an elevator to the top of the tower, which has two noteworthy features: observation windows and air conditioning. From that vantage point, you can see all of Havana and a good bit of the surrounding countryside. 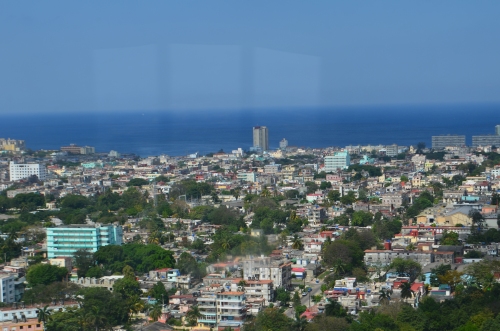 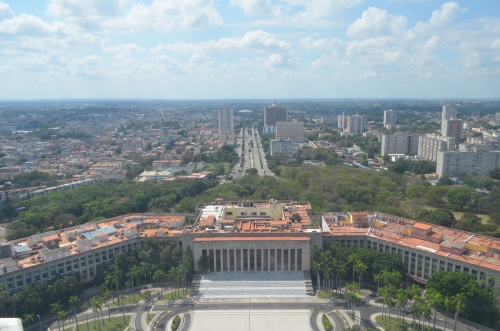 After a bit of effort I was able to capture a picture of this bird, whatever it was, which was flying around the top of the tower. Perhaps it was a DGI surveillance bird, checking up on tourists?

Che, there’s a bird on your face!

The plaza is near the National Theater so we decided to walk over there and check it out. As it turns out, this is a complex of low-slung buildings that have absolutely nothing happening on midday Monday. Herewith the nicely landscaped sign:

The sign was the best part of the theater

By this point we were all hungry again, so we decided to head back over towards the apartment and have lunch somewhere on the Malécon. The plaza had an impressive array of classic-car taxis lined up: 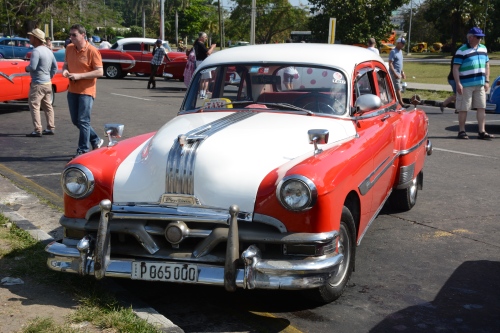 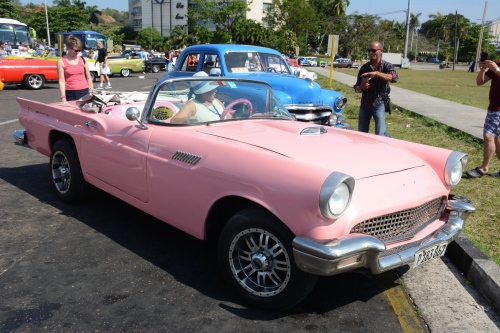 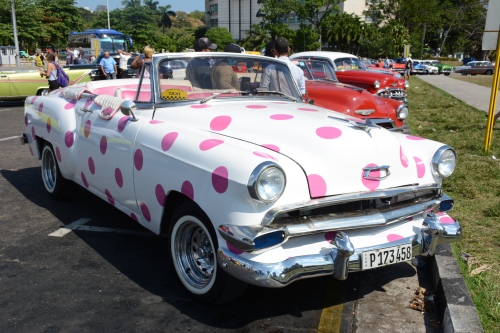 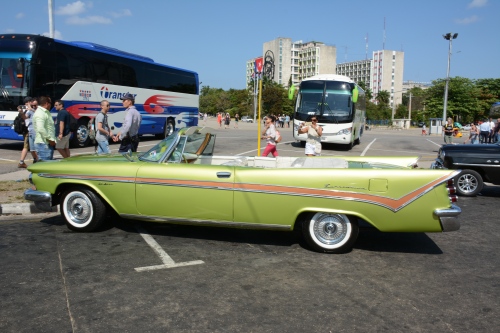 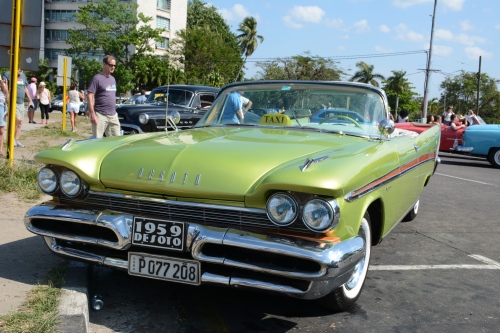 With a party of 6, though, we couldn’t fit everyone into a single car, and we could only find one! That meant that Tony, Julio, and I ended up in a cocotaxi, the little egg-shaped, two-stroke-engine-powered taxis that infest Havana streets. It did the trick, getting us to our destination intact and with only some exhaust poisoning:

Tony regards the cocotaxi with some suspicion, rightly so

We decided to have lunch and drinks at El Presidente, a restaurant and bar about a block from the apartment. Their daquiris are excellent, and I recommend them highly. Their food? Not so much. I ordered crepes with ice cream; they were out of ice cream, and the crepes themselves were rubbery and tasteless. However, the water views and the hilarity of Warren trying to speak Spanish to the waitress made up for it.

We walked back over to the Parque Central to grab some wifi. Julio wanted to go to Parque Lennon, named after John Lennon, so we grabbed a classic car and headed out for the 20-minute drive there.

The park itself was pretty interesting. Its main salient feature is a bench with a lifesize bronze of Lennon. 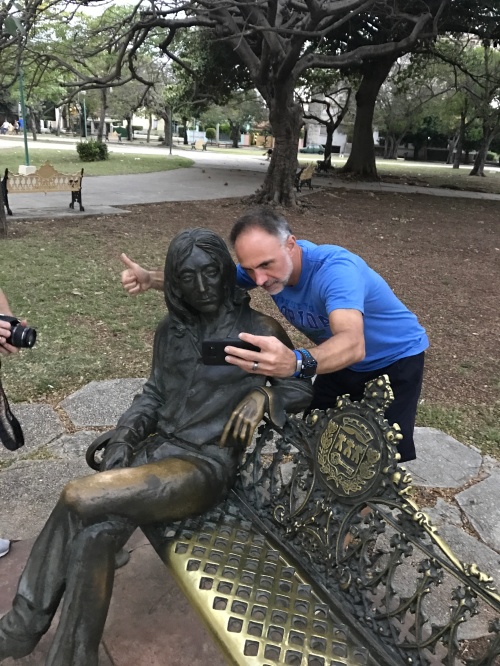 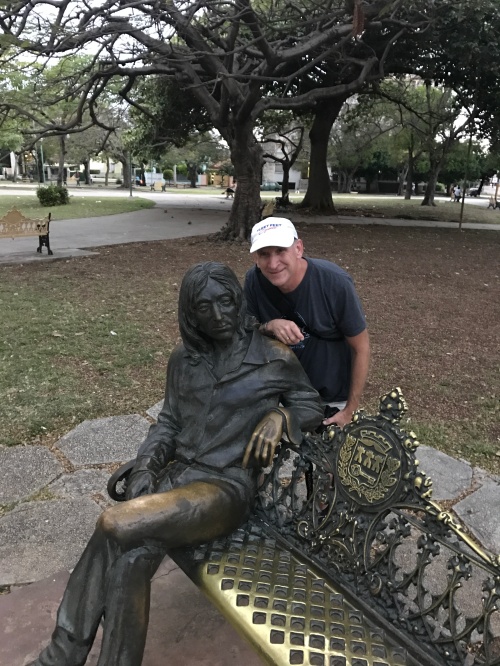 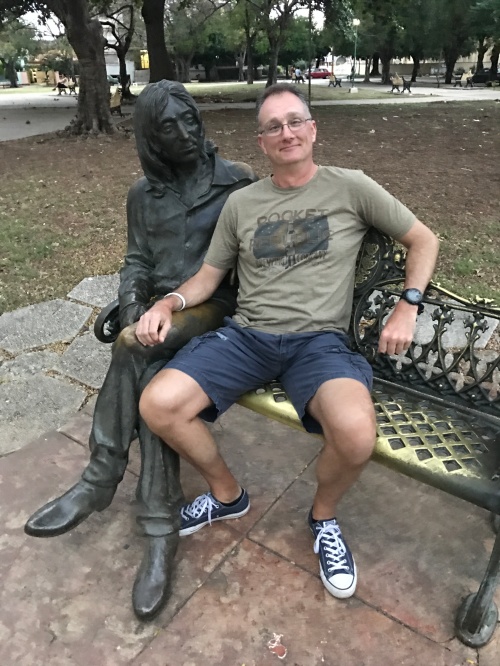 Other than that, it’s unremarkable– a nice city park with some open areas for kids to play soccer, a concrete bandstand/podium, and some trees. The best part of this outing was our cab driver– he was super friendly and personable and made the drive fun by (loudly) playing Cuban music on his (excellent) stereo.

Julio WISHES he could drive this car every day

After everyone had time to chill at the apartment for a bit, we headed out for dinner. Tony had suggested a place for which we couldn’t get reservations (I wish I’d written down its name). We wandered aimlessly around, stopping by El Floridita (too many lines) in search of someplace to eat, then we stumbled across a place Tony had mentioned earlier: Kilometro Zero. With live Cuban music, and superb food, this was one of the high points of my dining on the trip. I got to try ropa vieja for the first time. It is, essentially, slow-cooked shredded beef with spices, but that doesn’t capture how good it is. I look forward to learning how to make it.

The band at Kilometro Zero

Kilometro was pretty typical of the tourist-oriented places we ate– in appearance and decor, it would not have been out of place in most large US cities. The menu and service are what made it Cuban… and oh, that ropa! I am still thinking about how good it was.

Dinner took a long time, so afterwards, I headed back to the apartment to get some sleep. As usual, the Prado was semi-crowded, mostly with people camping out on benches using the available wifi… a uniquely Cuban sight.