The boys and I had been discussing where we should go on vacation. As usual, they wanted to go someplace exotic, like on a cruise. I counteroffered with a trip to our former home in Perrysburg, reasoning that it was an easy flight and that they’d like to visit friends. It turned out to be a great trip and a good example of the utility of personal aviation. The plan was for David, Tom, and I to fly to Ohio, where Matt would join us, then we’d all fly back together.

We left on a Sunday mid afternoon, loaded up our rental 182 with full fuel and our bags, and departed HUA for Bowling Green, Kentucky, 158nm to the north. There were some rainstorms moving from west to east near Nashville, so we had to dodge them a bit, but between guidance from ATC and the onboard weather data provided by my Stratus/Foreflight combination, that was no problem. It’s worth pointing out that the value of datalink weather in the cockpit is not for real-time storm avoidance. It’s to see where storms were the last time the weather data was updated and to plan routes so that you stay well away from potential trouble spots.

Anyway, the flight to KBWG was uneventful; when we landed, we called a taxi to take us to the National Corvette Museum, which I hadn’t previously visited. I think it’s fair to say that my jaw was at least partially agape the entire time. There are some spectacular cars there, and their memorabilia collection is excellent. Our lunch at the museum cafe wasn’t bad either. In fact, my only gripe with the entire stop was the taxi service; if you plan a trip through the Bowling Green airport be forewarned that taxis there are hard to come by and (at least for the two we had) decrepit nearly to the point of unsafeness.

From Bowling Green, our route of flight took us another 340nm to the northeast to the Wood County airport (1G0), coincidentally located in Bowling Green. As with many other county-owned airports, the Wood County airport is clean, modern, small, and lightly used, although Bowling Green State University has a flying club there and there’s a small FBO on the field. By the time we arrived, the building had closed but thankfully the vending and restroom areas are open so we could clean up a bit. Our friends Matt and Anita were kind enough to come get us, since there’s no good way to get a rental car in Bowling Green, Ohio on a Sunday evening; we had a great visit on the way to the hotel, the first of several.

The trip itself was marvelous. We went to a Mud Hens game, ate at all our favorite restaurants (yay for Mr. Freeze!), and saw many of our friends. I was shocked to see how much the “little” kids I used to teach in Sunday school had grown, and likewise I could tell that my adult friend were surprised to see David, Tom, and Matt in their 2013 editions. Perrysburg and the surrounding area didn’t seem to have changed that much. In fact, when we visited Imagination Station, the former COSI, it was surprising how little it had changed.

take me out to the ball game… (not shown: chili dogs, scoreboard showing Mud Hens’ loss)

On the trip back, we had too much stuff– Matt had brought 2 weeks worth of luggage with him back from Vermont, and we were already close to the weight limit on the 182, so we shipped some bags back via UPS. The 182 is a forgiving airplane but that’s no excuse for overloading it or loading it outside its acceptable center of gravity (CG) range, as difficult as that might be to do. For trips with all four of us, it looks like we’ll need a bigger plane, or to pack lighter.

On our return flight we planned a fuel step at the Springfield-Lebanon airport in Kentucky. As with 1G0, this airport seemed scarcely used. The very friendly attendant gave us the keys to a crew car and said “oh, I’ll be gone by the time y’all get back from dinner, so just leave the keys here on the counter”. True to her word, when we returned from an excellent lunch at Mordecai’s, she was gone, so we parked the car, fueled the plane, and departed again for the 220nm leg back to Redstone. Here’s how the flight went on the way back: 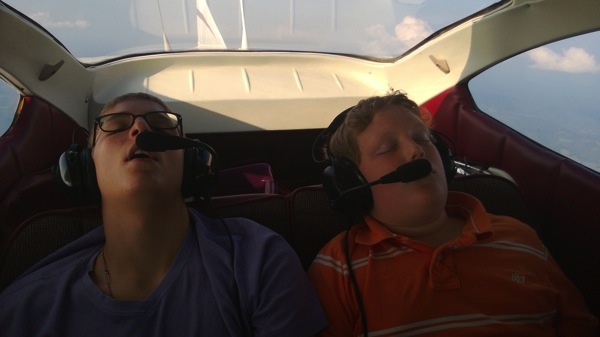 As a pilot and a father, that’s exactly what I’m aiming for: to make flights with my family so routine and uneventful that the kids fall asleep, get bored, and even quarrel a bit, just as they would in the car.. with the added bonus that a trip that would have taken 8+ hours each way in the car took less than half that. That’s one of the best parts of personal aviation: it’s a time machine, enabling you to go places in less time and thus making trips feasible that would otherwise be impossible. What’s not to love?

2 responses to “The Perrysburg Express”