TechEd Europe day 2, or, “A side trip to Segovia”

I woke up on time, showered and dressed, and took the shuttle bus to the convention center so that I could give my presentation on developing Exchange Web Services applications on iOS. While the talk itself went well, my demos failed, and I don’t know why– it didn’t seem to be the proxy issue I mentioned yesterday. I learned a valuable lesson, though; from now on I will always have a pre-recorded backup demo. In fairness, Navin Chand suggested that all speakers have backup demos, but I foolishly assumed that my demo would work (and, in fairness, in the nearly 15 years since my first presentation at a Microsoft event, they always have). Lesson learned.

Afterwards, I had another “ask the experts” session, along with Tom Kaupe from the Exchange Online Protection team at Microsoft. We got a few more good questions for the list of things I need to write about, but overall the session was fairly quiet– the attendees were obviously busy attending the day’s breakout sessions. When my shift was over, I took off for the metro station because I’d decided to make an afternoon trip to Segovia. Why? It’s full of good stuff, that’s why, including a Roman aqueduct, a huge cathedral, and the Alcazár de Segovia, a historic castle.

Getting there turned out to be fairly simple; RENFE, the Spanish national train service, has a high-speed express train that goes directly from Madrid’s Chamartín station to the Segovia station. The trip only takes about half an hour, so I jumped on the subway from the Campo de Las Naciones station adjacent to IFEMA, took it to Chamartín, and found that I had no idea how to buy a ticket for the commuter train. There is a ticket machine adjacent to the exit for the metro, but the trick turns out to be to exit the metro station and go aboveground to the actual train station. At that point I was easily able to buy a ticket for about 30€. With a bit of time to kill before the scheduled departure, I was able to find a shop selling sandwiches, where I had an excellent jamón serrano poboy– jamón on a baguette. It was delicious. Too bad it’s so difficult to import Serrano ham back into the United States.

To board the train, I scanned my boarding pass and sent my laptop bag through a metal detector. That done, I took my seat on the train, waited about 10 minutes for our delayed departure, and then watched the countryside (and two very long tunnels) pass by. Sure enough, in about half an hour we arrived at the Segovia train station, which can charitably be described as “on the outskirts of Segovia.” The #11 bus runs directly to plaza de Artilleria, which is on the southeastern edge of the actual town of Segovia. For 1€, it was money well spent. There isn’t much to see along the bus route, but as soon as the bus gets within a few blocks of its terminal stop, you can see the aqueduct, which looks much like this: 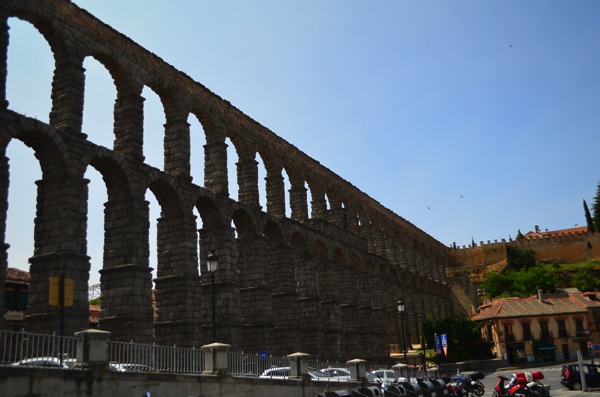 In the central plaza there are numerous shops and restaurants, including a Burger King. Many of them were closed for summer vacation, though– it looks like much of the town shuts down from mid-June until early July.

As far as I could tell, there’s no way to (legally) climb on top of or walk along the top of the aqueduct; it’s possible that I just missed the directions on how to do so, but I don’t think so. Adjacent to plaza de Artilleria, there’s a tourist information office where for 0.20€ I was able to use the bathroom, after which they gave me a handy free map. The clerk outlined a walking route down XXX street to the cathedral, then along YYY street to the Alcázar. I set out with her estimate of a 30-minute walk fresh on my mind and a 25-pound laptop bag on my shoulder. I may have neglected to mention that it was just under 90°F when I got there…

Despite the heat, though, the walk was quite pleasant. The Cathedral itself is stately on the outside but doesn’t have the overwhelming feeling that Notre Dame, for example, always imposes when I see it. It is still quite an impressive piece of work, as you can see here: 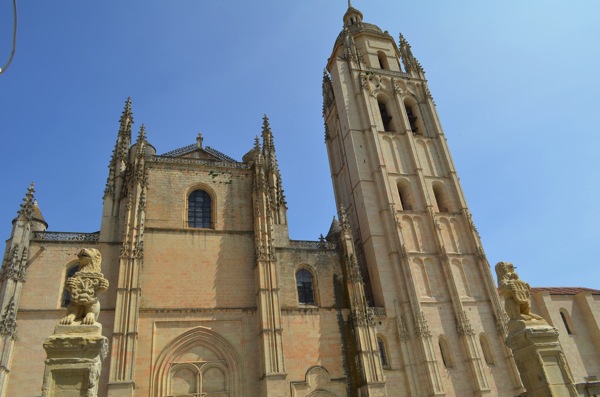 However, the real magic comes on the inside, for which I had to pay another 3€. Oh, and I stopped along the way for a frozen yogurt; the clerk asked me for a choice between mango and “sandía,” which I chose because it looked tropical. Surprise! That word means “watermelon”, yuck, spit. Actually, because European frozen yogurt doesn’t have anywhere near as much sugar as the American equivalent, the combination of the yogurt flavor and the watermelon was actually quite good… but I’ll be more careful next time. But I digress. Whatever your opinion of the religious beliefs which motivated it, it is hard not to be impressed with the craftsmanship and effort that went into the interior of the cathedral. I am not sure, for example, what this display is all about but it is certainly fancy:

I think my favorite part of the cathedral was the architecture itself. For example, this walkway had a very welcome breeze blowing through it; it was quiet and cool, with a glimpse of the inner courtyard’s garden. I enjoyed the interplay of the lines and shadows with the patterns of stone on the ground. 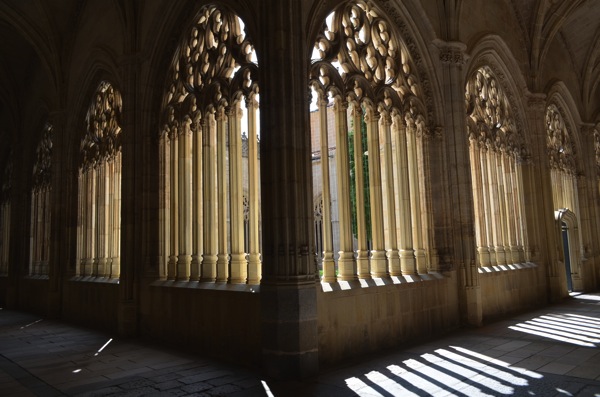 After another 10 minutes or so of walking,  arrived at the Alcázar de Segovia itself. You can’t really see it from far away because it’s set adjacent to a ravine which serves as a dandy natural moat. There’s also a pleasant park with large trees screening it. Walking past the park quickly brings the castle itself into view.

Stepping off to the side really makes clear how the original structure takes advantage of the terrain– you can see that the ravine descends well below surface level. (It goes deeper still but the lens I had wasn’t wide enough to get it all). 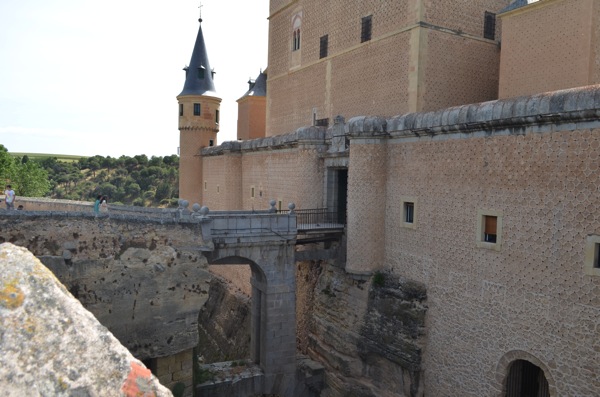 The castle itself is full of all sorts of nifty artifacts, including a museum dedicated to artillery– the castle used to be the site of the royal college of artillery. There are also several suits of armor, cannons, and so on. I finished my tour by climbing the Torre de Juan II, which requires navigating 157 very narrow, very steep steps up a spiral staircase. Along the way you can see the engineering features that helped provide defense in depth for the castle: downward-facing arrow slits, holes for pouring burning oil, and the like. It was well worth the climb, however, because the view was superb. My favorite picture from this part of the excursion was this shot of the cathedral and the city of Segovia. I also had a good time taking pictures of various tourist couples who wanted their photo taken with the city as a backdrop. One of them returned the favor (notice my spiffy Exchange shirt; its presence makes this post TechEd-related). 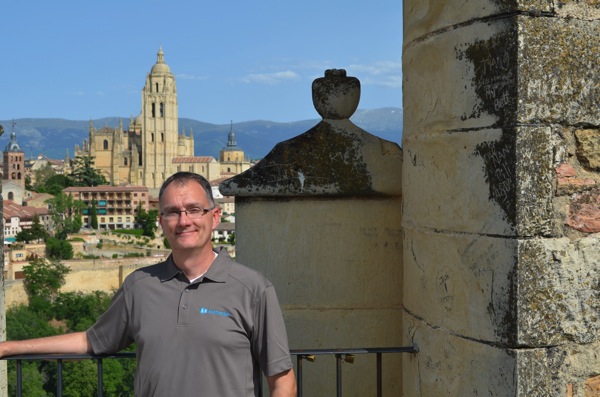 After my tour of the Alcázar and tower, I went to the small café located on the grounds. It’s located in the building that used to be the royal chemistry lab, and I can believe it; I’m not sure what kind of crack they put into the hot chocolate but it was the best beverage I’ve ever had– like drinking liquid chocolate pudding. Sadly they were out of churros, but that’s probably just as well. So fortified, I walked back into town, caught the #11 bus again, took the train back to Madrid Chamartín, then took the metro back to the hotel. All in all, a day well spent!

One response to “TechEd Europe day 2, or, “A side trip to Segovia””