TechEd Europe opened on Tuesday, while I was still in transit. I missed the keynote, which is pretty much par for the course. I think the last TechEd keynote I attended was the 2005 version that included BattleBots.

My first assignment for the day was working in the Ask the Experts area. That’s not necessarily what it’s called, but that’s what we all call it. ATE is my favorite part of attending conferences such as TechEd and MEC because you never know what kind of questions you’ll get from attendees. They range from very simple to incredibly complex and environment-specific. The interpersonal dynamics are fun too, because different attendees have different attitudes towards the product and their experience with it: some positive, some negative, and some befuddled. I always enjoy meeting live customers and finding out what kinds of challenges they face, and ATE is the perfect venue for it. (I have a separate post planned in a day or two summarizing the questions I’ve gotten while I’ve been here.

Demos done, I went back to the show floor to walk around. There I had a great talk with Kemp Technologies’ Bhargav Shukla, who is one of my fellow MCM instructors (though he teaches both Exchange and Lync). Among other interesting topics, I learned that Kemp has a prototype load balancing appliance for Windows Azure– not a device that goes on-premises and directs some traffic to an Azure network, but an actual VM that runs on Azure and does load balancing natively there. Microsoft isn’t quite sure how to package and sell Azure objects that are not applications, but I’m confident that they will figure it out. Bhargav also let slip that Kemp is in the process of adding PowerShell support to their load balancers, which marks a first as far as I know. It speaks well of them as partners in the Microsoft ecosystem when they embrace Microsoft’s technologies in such a comprehensive way. (The other takeaway from our talk: I’m jealous of the two days Bhargav spent driving a motorcycle around metro Madrid!)

I also got to meet Ed Wilson of Microsoft, the original Scripting Guy. He offered me the opportunity to write a couple of guest columns, and I eagerly accepted. Look for more news on that soon.

In the evening of the first day, TechEd historically holds a reception n the expo hall where attendees can mix and mingle. We had a great turnout at the combined Exchange/Office 365 booth; I gathered several good questions from attendees that I’ll be writing about a bit later. The energy of TechEd Europe is always quite a bit different from the US show; it’s smaller, so it feels less formal and less rushed. The exhibitor mix is different, too. Even large companies such as Dell and Intel which have a presence at both places typically send different staff. Microsoft is no exception; in addition to many of the folks I’d seen in New Orleans, Nathan Winters and a host of other European and UK Microsoft staff were on site.

I finally got back to the hotel about 9:30pm after a short but slightly confusing ride on the Madrid metro system. This seemed late, but of course by Continental standards it wasn’t even dinner time yet. I took care of some administrative baloney with my bank and mortgage companies, then remembered: someone had suggested I visit Madrid’s old post office (better known as Palacio de Comunicaciones). Although  I could have taken the metro again, it was nearly 11 before I left my room and I was in a hurry, so I took a taxi there, shot a ton of pictures (my favorite is below) and then taxi’d back. 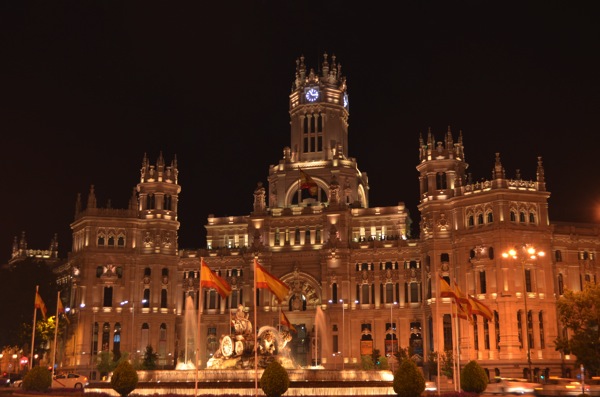 I noticed on the return that the area around the Melía Castilla has a surprising number of tall, slender, very attractive women just loitering on the street. I have no doubt that they are there to serve as tourist guides for anyone who is lost and needs help. Madrid is lucky to have so many fashionable ambassadors in such a convenient location, but since I knew where I was going I was able to make it back without any of their help.

After all that activity, I was pretty well exhausted, so I checked in to tell the boys goodnight and hit the rack– though it has many other charms, I can say that the hotel beds at this particular hotel are not unlike sleeping on a brick sidewalk. Then it was time to get up and get ready for day 2!

One response to “TechEd Europe, day 1”