On “Tweeting your insomnia”

The poster, who is sitting upright, performing a task with his/her hands requiring considerable dexterity, and staring at a brightly lit and colorful screen can’t get to sleep.

See, here’s the thing: smartphones. It’s perfectly feasible to dash off a quick tweet, text, or Facebook status update in the middle of the night while remaining horizontal, and perhaps even using only one hand. Hell, you can even dim your phone’s screen before you go to bed so that it doesn’t blast you in the face like Ivy Mike.

Personally, I will often read and respond to texts, check Twitter, and occasionally even check in on Facebook or read e-mail when I can’t sleep. It doesn’t hurt, and sometimes it helps pass the time.

You don’t even have to be all the way awake, any more than you have to be completely sober (so I’m told.)

As for the quality of these communications, in both syntax and content: well, that’s another matter. If you get a garbled text from me, and it’s late at night where I am, that’s probably why.

Bonus image from Hyperbole and a Half. 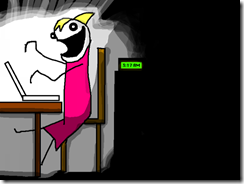 One response to “On “Tweeting your insomnia””