Recently I had the opportunity to do something remarkable: go for a bike ride in Provence! I had to be in the UK for business one week and in Nice the following week, so I was debating what I should do with a free weekend in Europe. Once I learned that there were bike-tour operators near Nice, I quickly decided to find one that could get me out on the road for some portion of the weekend.

Thanks to a recommendation from my local triathlete friend Kate, I found Azur Cycle Tours,  whose guided-rides option sounded perfect. There are a fair number of other tour operators that do longer multi-day tours, too, but Azur was the first I found that could set me up for a one-day ride, including use of a rental bike. I made all the arrangements via email with Justin, the owner, who was prompt and communicative in our exchanges.

I planned to arrive at the Nice airport Friday evening, spend Saturday poking around the area, and then ride on Sunday. Justin agreed to supply a road bike, and I planned to bring my PowerTap pedal power meter, a bike computer, and clothes and shoes. I booked a room at the Azur Cycle Tours apartment for two nights, packed my bags, and arrived there shortly after midnight– a good four hours later than originally planned. Justin was kind enough not to snap at me and gave me a quick tour of the apartment, which was exactly as promised on the web site: modern, comfortable, and well situated near shopping, restaurants, the beach, and the Beaulieu-sur-mer train station.

The next morning I woke up to this glorious view… 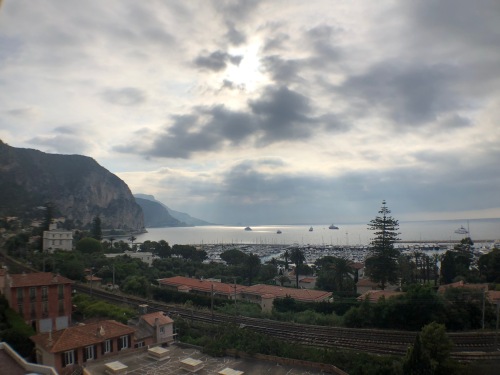 Balcony view from the apartment

Justin, as promised, had prepared a hearty breakfast of oatmeal, fresh berries, and bread from the boulangerie up the road. We had a pleasant chat about the local area, then he left to go lead rides and I donned a 10kg weight vest and went for a walk around town. I strolled down along the beach (named “La Petite Afrique” for some reason) and then walked along the Basse Corniche up over a hill for a ways. This treated me to some splendid views of the water and the dozens of large seagoing yachts anchored at various spots. 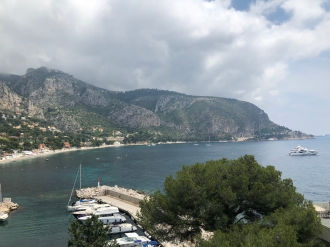 From the top of the hill

A view along the seawall

And from the top of the other hill

After I walked back to the apartment and dropped off my weight vest, I decided to walk into Beaulieu and find lunch. As I passed the train station, I had a better idea: why not go have lunch in Monaco? I bought a train ticket and headed off, and in 20 minutes or so I was disembarking at the Monaco station. It became clear pretty quickly where I was when I saw this:

I walked down to the Casino, where I was surprised and delighted to find a classic-car rally in progress. For a “modest” donation to the Prince’s favorite charity (something to do with heart disease, as I recall), you could rent any of a number of privately owned classic cars and drive them around. Here are a few of the stunners on display. 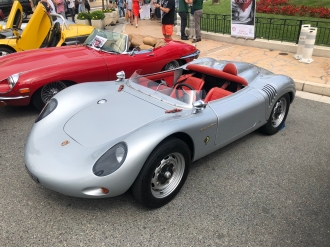 My favorite was the Aventador, though; without a doubt it is the most beautiful manufactured object I’ve ever seen in person. Sadly this photo doesn’t do it justice. 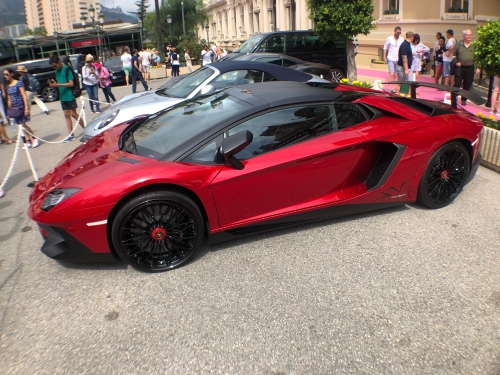 The casino itself isn’t too shabby either.

I walked around the casino area for a while, taking pictures as the mood struck me. It’s a delightful area for people-watching, of course, and there was plenty of that on offer. I saw and heard tourists from all over the place. Then I took the train back to Beaulieu, where Justin suggested to me that I try dinner at Les Vents des Anges in town. The highlight was this salad, consisting of warmed rounds of goat cheese on toasted local bread with fresh greens and peppers. It was, hands down, the best salad I’ve ever eaten, and the wine and entree (saltimbocca, in this case) were equally good. A short walk back home, and then it was bedtime. 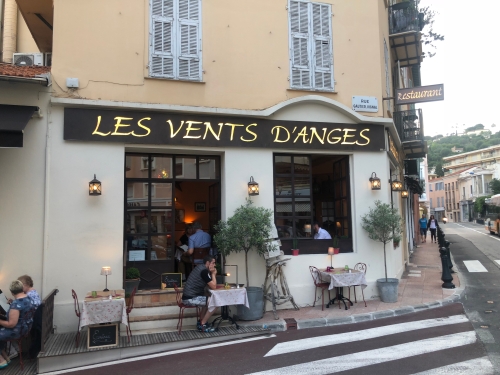 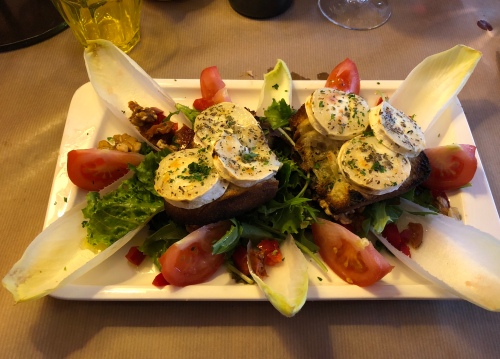 The next morning dawned sunny and clear. Justin and I had planned to meet for breakfast at 730 then roll out shortly thereafter. It took 20 min or so to mount my pedals, bike computer, and camera on the bike, get it adjusted, and so on, then we rolled out. Check out this route….

Relive ‘Do Epic Shit: Beaulieu to Tourrette and back’

We were able to leave Beaulieu and head west into Nice, starting with a short climb into Villefranche and then riding along Nice’s excellent cycle path that parallels the famous Promenade des Anglais. Then the ride started in earnest. Our first stop was in La Colle-sur-Loup for a snack, which in this case was a marvelous berry tart and a cup of poisonously strong coffee. The whole town square, and most of the surrounding streets, were filled with… a PTA fundraiser for the village school. Yep. You read that right. Change the language on the signs, bring in some box-mix cupcakes, and turn all the volunteering moms into non-smokers and the whole event could have been plucked right from suburban America.

Then back on the road! The toughest part of the ride was just ahead: the long climb into Tourrette-sur-Loup, which interestingly enough is part of the Ironman Nice course. This offered remarkable scenery in all directions, including up and down.

We stopped in Tourrette-sur-Loup for a splendid lunch: another great salad and a marvelous lasagna. (Italian food is pretty common in this part of France, perhaps unsurprising given how close Italy is). We also filled our bike bottles at the municipal fountain. Nearly every village has one, and the water at each of the ones we sampled was clear, cold, and delightfully fresh. 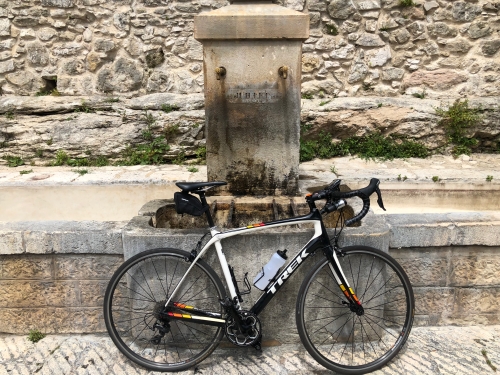 After lunch, we rolled back into Nice along a slightly different route– no steep descents, but a very pleasant series of switchbacks and hairpins. It took me nearly this long to understand why the bike Justin rented me seemed so smooth and quiet compared to my Cervelo P2: I have race wheels with a racheting freehub, so when I coast, they make that super-cool clicking noise. This bike didn’t have that, plus the drivetrain was adjusted to approximately the precision level of the Space Shuttle, so it was a delightfully smooth and quiet ride.

Along the way, I was able to pause to take a couple of photos of scenic spots. Also along the way, we made one final stop for ice cream, which I sadly forgot to take a picture of. 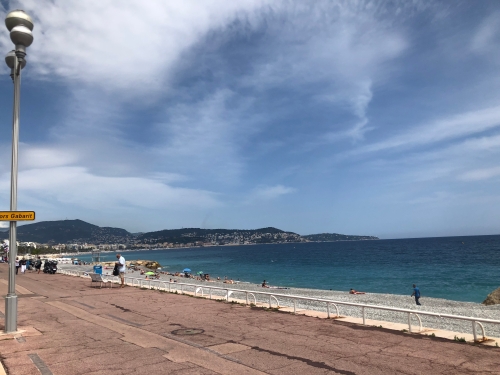 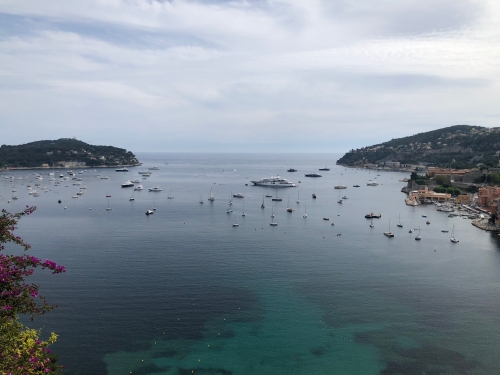 A note about the roads: even in this rural area, the roads we rode on were marvelously smooth and well-maintained, with good markings and signage. About 99% of the drivers we encountered gave us a wide passing margin, and I never felt unsafe or threatened. We saw a few dozen other cyclists along the route and everyone was friendly.

Back at the apartment post-ride, I used the provided laundry machines to wash my kit while I drank a beer and looked out at the water, then, reluctantly, I packed my stuff and departed for my next leg of the trip.

Overall, I could not be more pleased with the Azur Cycle Tours experience. Justin was an excellent host, with encyclopedic knowledge of the local area and route. He kept up an informative and interesting commentary about what we were seeing as we rode; he chose a route that was appropriate for my skill level but still challenging, and he made me feel like a welcome guest instead of the tour du jour. I am looking forward to returning and riding a more challenging route in the future!

[ed. note: I wrote this using a Windows machine and I refuse to deal with its stupidity when it comes to entering accented characters– please be reassured that my French spelling is better than shown here.]