Every pilot has different reasons for flying. For me, a big part of my love of flying is the ability to travel, relatively quickly, where and when I want. The values of “quickly,” “where,” and “when” are all subject to a variety of constraints, though. Some are self-imposed and some are limitations imposed by the FAA, the laws of physics and aerodynamics, or my desire to live to be a grumpy old man.

Let’s take one simple example: time. It would certainly be possible for me to fly from Alabama to southern California for a business trip, but I wouldn’t do it for a short trip— in my particular airplane, that would take me about 11 hours of flight time, which translates into something like 14 hours of total time when you factor in fuel stops… and that really means it would take two days, since flying for that length of time in a single day would make it difficult for me to maintain the focus and energy required for a safe journey. Likewise, I could easily fly from here to Birmingham for dinner, but when you factor in the time required to preflight and prepare the plane, conduct the flight, get to and from the restaurant, and return home, it would be quicker to drive over the short distance. For me personally, with the airplane I have now, the sweet spot is trips of about 150 miles up to about 1000 miles. Shorter or longer trips are possible, but when time is important, taking another means of transport is usually more sensible.

We can lump all the other constraints together into the general heading of “dispatch reliability.” That is, for a planned trip, how often are you actually able to complete it without bumping up against those constraints? It’s critical to keep in mind the difference between a commercial airline (which flies under Part 135 of the Federal Aviation Regulations) and my airplane, which flies under Part 91 of the FAR. There are 3 major factors that influence dispatch reliability in both of those worlds: weather, equipment, and regulation.

The ability to deal with weather, of course, is a huge part of dispatch reliability. I once was stuck away from home for 3 days because the weather was poor and I didn’t have an instrument rating, so I couldn’t leave when I wanted to. Sometimes the weather, or the forecast, is just too crummy to safely complete the planned flight. This happens more often in some places than others, of course; east of the Mississippi, we have lots more thunderstorms than in, say, California or Washington.

Equipment influences dispatch reliability in two different ways. First is redundancy. Unless it were truly urgent, I wouldn’t make an extended night flight in IFR over rough terrain in my airplane— not because it’s inherently unsafe but because, with only one engine and one vacuum system, there are several single points of failure that could make such a flight more exciting than I’d like. Waiting for daylight or better weather would be a smart play. On the other hand, commercial planes flying under Part 135 have doubly- or triply-redundant systems, ranging from engines to hydraulics to avionics. As you spend more money on an airplane, the number of redundant systems (and the reliability of the systems you have) tends to increase. The capability of your equipment also influences reliability. If you have onboard weather radar or in-cockpit radar data through XM Radio or ADS-B, for example, you may be able to complete flights that you wouldn’t without that data. More sophisticated aircraft that have jet engines and pressurized cabins can fly above many regions of bad weather; aircraft with icing protection can fly through moist clouds without picking up a killing load of ice. Most piston-engine singles (mine included) aren’t pressurized, don’t have anti-icing equipment, and don’t have onboard radar— meaning that there are conditions that are no problem for Delta or United but render general aviation flight impossible or unsafe. Both airliners and general aviation aircraft have lists of requirement equipment. Although the contents of the lists are very different, the concept is the same: if something on that list isn’t working, you can’t legally fly. (Keep that in mind the next time you’re on a commercial flight and the pilot tells you that some seemingly unimportant gadget isn’t working so they have to wait for a mechanic— if they’re waiting to fix it, it’s probably because it’s on that minimum list.)

Regulation is the third category. Without going into all the differences between different parts of the FARs, I can still say that there are some conditions that are legal for me but not an airline, or vice versa. For example, thanks to my instrument rating, it is literally legal for me to take off with such poor visibility that I can’t see the propeller while sitting in the pilot’s seat, while Part 135 flights have specific runway visual range (RVR) requirements that must be met before they can depart. On the other hand, a suitably equipped and crewed Part 135 flight can use Category III autoland to land in zero visibility, whereas I have to honor a higher minimum ceiling and visibility limits. There’s sometimes a huge difference between what’s legal and what’s safe, and the FARs that I fly under give a great deal of latitude to the pilot in command in most cases. That can be good or catastrophically bad, depending on your judgement.

In general, the rule I use is simple: if it is critical that I be somewhere, and I’m planning on flying, I’ll always have a backup. Last week, the boys and I were going down to the Voodoo Music Festival in New Orleans. We’d planned to fly, but when I preflighted the airplane, this is what I found: a broken alternator belt. 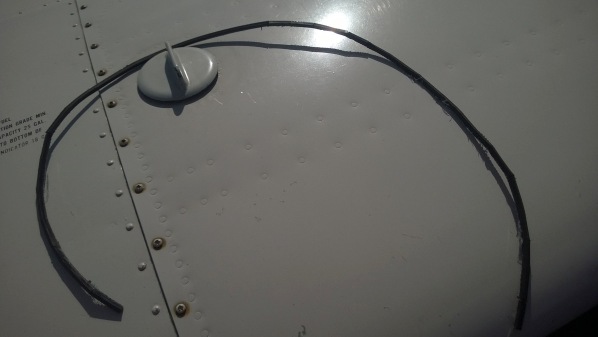 I didn’t have a spare, the shop didn’t have a spare, and even if we had, on my plane, you have to remove the propeller to replace the belt. We drove instead, but we still got to see the headline act because we’d built enough slack into the schedule. Likewise for weddings, funerals, or critical business meetings— if it’s really important, I’ll have a backup airline ticket in my pocket (or enough time to drive). If it’s not critical, I’ve learned to accept that sometimes the weather or the airplane may conspire against going. A couple of months ago, Dana and I had planned to fly down to Gulfport for the day to see Mom, Charlie, and Grandma. Here’s what the weather looked like: 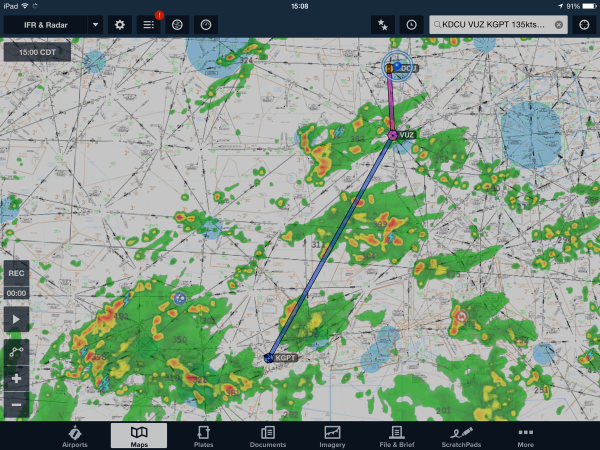 Score that one in the “nope!” column. It would have been perfectly legal to pick my way around those storms, since I didn’t have the equipment to fly over them, but it would have been uncomfortable at best and criminally dangerous at worst. Driving would have taken too long, so we reluctantly cancelled; it wasn’t a critical trip.

Having a backup plan or the willingness to say “we’ll do this another time” is critical because it eliminates the pressure to attempt a flight when weather, equipment, or regulation might dictate otherwise. The hoary old saying “it’s better to be on the ground wishing you were flying than flying and wishing you were on the ground” applies in spades. Even when it’s difficult to tell your boss, your family, or your customer that you won’t be somewhere at the appointed time, it’s a hell of a lot easier than explaining yourself to the FAA, the NTSB, or St. Peter.