Today the Office 365 team announced the rollout of the first phase of the Groups feature. I hadn’t been playing close attention to the roadmap for this particular feature, so I decided to play around with it and report my findings. Rather than the kind of carefully reasoned analysis you might expect from Tony or Van Hybrid, this is sort of a stream-of-consciousness record of my initial exploration. However, it probably reflects how most customers will discover and use the feature. Remember that this is written within a few hours after the feature launched, so things that I call out as not working or missing may not be lit up in my tenant yet.

Creating a new group is straightforward.

Note that there’s no way to specify an email address for the group object. You can send mail to it from within OWA, or by clicking the envelope icon in the group information sheet, but there’s no visible external SMTP address to, send to. This seems like an oversight. 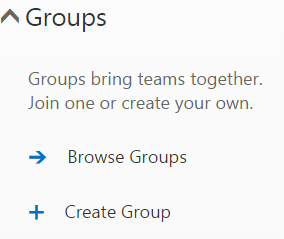 From the bumpy state of feature display and behavior at this point, I infer that there’s a multi-step provisioning task that runs when a new Group is created, and that at least the ODB step hasn’t run yet. This might confuse users who wonder why they can use a group for one purpose (sending mail) but not another (ODB). I’ll wait a day or so for the provisioning and loop back to see which of these items are bugs and which are just caused by setup delays.

6 responses to “A few quick notes on Office 365 Groups”