Yesterday was my first day in Santiago, Chile, which means it was also my first day in South America. I’ve previously visited Asia, Africa, Australia, and Europe, so now all I need to do is contrive some way to get to Antarctica and I’ll be all set.

To get here, I flew on Delta’s flight from Atlanta, about which I can say that only that it was adequate. My Economy Comfort seat was decent, and I slept for a good six hours or so, waking up just in time to watch the sun rise over the Pacific.

sunrise, before it got too bright to actually take pictures of

Upon arrival at Santiago’s airport, I found that Chile, like Brazil and Argentina, charge incoming visitors if those visitors are citizens of a country that charges Chileans an entry fee. For example, Chileans visiting the US must pay a $160 fee, so Americans visiting Chile have to pay the same fee. This is handled via separate set of stalls at customs: first you pay the fee and get your passport stamped, then you go through immigration, then you claim your luggage and go through a customs inspection. During this process, I learned that you are not permitted to import beef jerky (or other kinds of smoked meats) into Chile, which is too bad because I had packed a bunch of it for quick protein. Alas.

I’d already reserved a taxi through TaxiOficial.cl, as recommended by our travel department. After baggage claim, a quick stop by the payment desk netted me a receipt that I handed to the driver, who whisked me off to the Intercontinental in the business district. The hotel is well situated right near a major highway, a large mall, and, well, lots of businesses. I checked in, took a quick shower, unpacked, and set out to go exploring.

First, though, I rented a car. This was recommended by SantiagoTourist.com, a web site I found while at the hotel. (Oddly the hotel wifi seems to block Bing, but allows Google.) For about $60, I got a manual-transmission Chevy Spark, the smallest car I’ve ever driven. However, it proved to be adequate for my needs, since all I really needed was basic transportation. First I drove to the Bellavista area so I could go up Cerro de San Cristobal. (ed note: I’m typing this on a Windows machine that doesn’t make it easy to add accent marks, so I’m not adding them. Just pretend like they’re there.)  I parked in a public garage on Calle Pio Nono and walked about 8 blocks to the entrance of the park, from which you can take a funicular railway to the top, hike up a trail, or ride on a bike path. I elected for the funicular, which was a good call, as I got some excellent pictures on the way up. As you can see, it was a typically hazy/smoggy day, so the mountains were visible more as a suggestion of mountains than anything else. 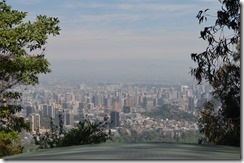 looking down onto the city from the railway

The funicular, which cost CLP$2600 (or around US$7)  stops halfway up so you can go to the zoo; I declined and went all the way to the top, whereupon I was able to climb up to the top of San Cristobal. There’s a chapel there, along with a large statue of the Virgin Mary, which you’ll see often in images of Santiago. However, from one angle I spotted something unusual—a ladder running all the way up the statue. I was sorely tempted to climb the scaffolding next to the statue and ascend this ladder, but since I didn’t think going to jail in Chile would be much fun, I decided not to.

After taking the funicular back down, I walked through part of the Barrio Bellavista area, more or less following the walking street-art tour that SantiagoTourist recommended. This turned out to be time well spent; some of the art was amazing, while some was just good, but there’s a lot of it. A few samples:

A few of the many murals and street paintings in Bellavista

After Bellavista, I drove back to the hotel to plug in my gadgets for a few minutes and plan the rest of my day. (I made another stop en route, thanks to a suggestion from my friend Anne, but it’s classified until Christmas.) A quick glance at the map showed that I was close to Parque de las Esculturas, a large  open-air sculpture park and botanical garden, so I headed out to walk it and see what’s what. The park itself is right next to the Mapocho River, the level of which varies greatly according to how much snowmelt and/or rain is nearby. The park was full of people, mostly couples apparently looking for a place to smooch away from their parental units. Lots of stray dogs, too; that’s sort of a hallmark of Santiago (one night I saw three dogs in the middle of a six-lane road chasing each car as it passed; miraculously none of them got hit.) None of the sculptures especially resonated with me, but the park also has little islands of trees, most native to Chile and/or Argentina, and it was neat to see the differences in the native flora and the kinds of trees I’m used to. As an example, here’s a picture of an ombu treefrom the park.

I’d never heard of an ombu tree before

After the park, I walked back towards the hotel, stopping at the enormous Costanera Center mall. It’s basically just like an American mall: it has a Dunkin Donuts, an Applebee’s, and a ton of other US-centric shops. That made me want to leave, since ordinarily I avoid malls like the plague. It was moderately crowded, so I could people-watch, and I was hungry, so I decided to stay. Luckily there were some local restaurants; the top-floor food court has a very nice assortment of sitdown restaurants, American fast food, Chilean fast food, and snack shops. I decided to sit down and have a steak… but took the waiter’s advice and ordered without looking at the menu, a mistake that ended up costing me $87 for what was, admittedly, an excellent steak, a platter of jamon and mozzarella, and a pisco sour. Still, I was surprised; Santiago is pricier than I’d anticipated. Apart from that, there was nothing remarkable about the mall except for its size; it has five huge floors with several hundred stores; if I don’t go back that will be fine with me.

By that point I was pretty tired, so I headed back to the hotel, read a bit, and went to bed. What I should have been doing was planning my trip to Valparaiso for the next day, but hey.