[ this is pretty old– the flyby was 21 September 2012, and I just found this post lingering in my drafts folder. I wrote it with the intention of finding an aviation outlet for it. It would have been much more interesting had I posted it sooner– sorry about that. It turns out that no one wanted a “real” article on the flyby, so I’m publishing this– better late than never.]

“Once in a lifetime” is a perhaps overused phrase. However, with the demise of the Space Shuttle program, almost everything associated with the program has entered its last phase. Endeavour was the last of the shuttles to be built; it was a replacement for Columbia. It is thus fitting that it was the last Shuttle to be retired, and when I found out that its farewell flight would take it through the Bay Area I made plans to see it. NASA announced the route of flight and a tentative schedule a couple of weeks in advance, but I didn’t start planning seriously until a couple of days ago. My first stop: an email to the press coordinator at NASA Ames, asking for press credentials on behalf of Windows IT Pro. Astute readers will know that they don’t usually publish aviation stories (and I am working on a real article for a real aviation publication) but I figured it was worth a shot. Sure enough, they put me on the press access list.

A few coworkers and I got to talking about how to best take advantage of this once-in-a-lifetime opportunity, and the game was afoot.

The first decision: where would the best viewing be? The route of flight was supposed to take the Shuttle from south to north. At first it looked like the Palo Alto airport might be the simplest place to go: limited crowds, no problem with parking. However, we weren’t sure exactly what path it would take, and I was worried that we wouldn’t get a good angle from the accessible areas. Eric suggested a spot in the wildlife refuge but we ruled that out as well. With press credentials, we reasoned, we shouldn’t have any problem getting on base or getting a good spot.

Eric picked me up at a nearby Taco Bell about 8am and we made our way to the Ellis gate, where we were quickly admitted and directed to the press area. The helpful NASA PAO staff gave us credentials, and we bumped into fellow Acuitan Tim, whom we deputized as a backup photographer. We tried to buy breakfast, but the food trucks were largely out of food since they had opened at 0600, thus illustrating something about early birds and Belgian waffles. As we walked through the line of booths that NASA Ames had set up to showcase their work, I was surprised and pleased at how many young kids were there. The crowd vibe was surprisingly upbeat given the fact that, when you think about it, this was a sad occasion: the final flight of the last of the United States’ fleet of man-rated spacecraft.

The flight operations building was where we’d planned to watch the flyby. Our press credentials got us in and we made our way through the building to the back apron. Here’s a sample of what it looked like from ground level. 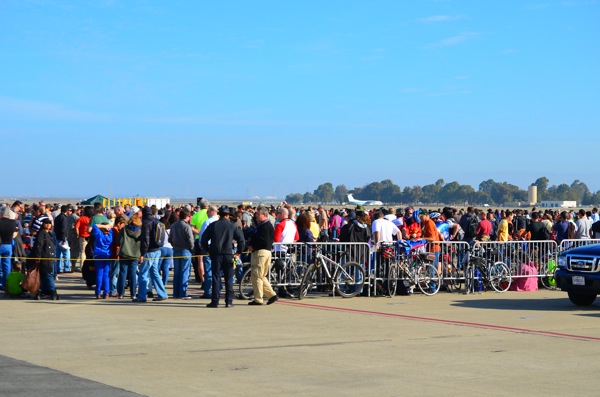 We heard estimates of the crowd size ranging from 13,000 to 20,000; I didn’t get a final count from the Ames PAO but it was a large and cheerful crowd.

I made a few exploratory forays to the parking apron to see if anyone yelled at me for being out there. No one did, so our first plan was to set up our tripods out there when the Shuttle got closer, on the theory that setting up too soon might get us ordered back to the seating area. In the meantime, though, we went inside the building to have a look around. Seeing a stairwell, Eric suggested we go see what was on the second floor; Tim volunteered to watch the camera gear and Eric and I went upstairs. The second floor is dedicated to offices for the control tower– Moffett Field, of course, has its own Class C airspace with a control tower, and that tower happens to be located on top of the building we were in. At the end of the hall, we came to another stairwell; a quick exchange of glances was all it took to convince us to go up and see what happened. There we were greeted with an imposing site: a big, black metal gate with a sign warning us not to enter. The gate, however, was open, and we could hear voices coming from above– so after a bit of consultation, during which I believe the word “bail” may have been used once or twice, up we went.

Soon enough we found ourselves on the outside of the control tower. There were some other folks on the east side of the tower, in full sun; we had a shady corner on the west side to ourselves. Amazed at our good fortune, Eric went to go get Tim and the camera gear. He then got to meet the tower chief, who was a little aggrieved that the media was invading the outside of his tower. Eric and Tim were able to convince him to let them rejoin me up top, as you can see below.

Here are Eric and Tim  enjoying a moment of peace and quiet before they started slinging camera equipment around.

(I should note that this picture was taken with a Nokia Lumia 800, the camera software for which is about a million times better than the iPhone’s built-in app.) The elbow you see in the extreme right of this picture belonged to Pat, one of the tower managers; he was very friendly and was kind enough to keep us informed about where the Shuttle was during its flight. We had been expecting the Shuttle to fly down the length of the runway from the south; turns out it was going to approach from the north, meaning that it should have  come from right next to Tim’s head in the picture above. We set up our cameras: Eric and Tim had theirs on tripods; I had a camcorder on a monopod and my D5100 around my neck.

We waited; the PA announcer would occasionally give the crowd updates, and at last the call came telling us the aircraft were only a couple of minutes out. We readied our cameras. Surprise! Rather than flying along the runway centerline, as the PAO (and announcer) had repeatedly told us would happen, the Shuttle stack flew along 101– to the west of Moffett– on our side of the control tower! Our seeming bad luck at getting a spot away from the runway turned out to be perfect luck indeed. The Shuttle’s chase aircraft flew down the runway centerline, but I doubt anyone was paying much attention to it.

The actual flyby… wow. I was too busy taking pictures with my camera to notice which way the camcorder was pointed, so I didn’t get any video, and some of my pictures are poorly composed because I was eagerly watching the flyby with my Mark 1, Mod 0 eyeballs instead of looking at the camera. Here are the two best of the resulting pictures: 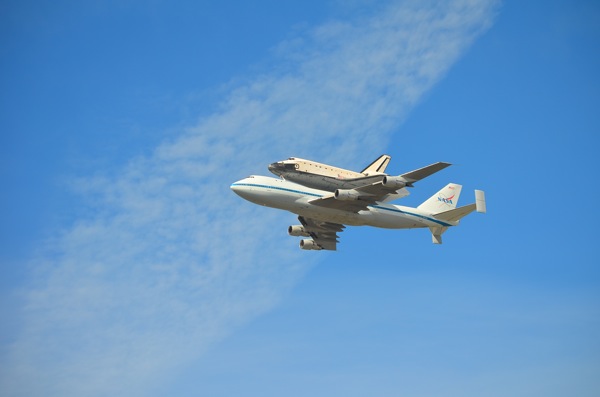 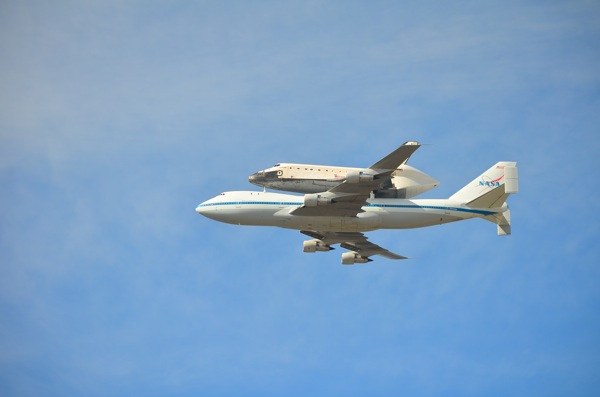 After the flyby, the crowd slowly dissipated; it took us about half an hour to exit Moffett and get back onto 101.