Saturday I worked a bunch, then went for my first solo flight here in the Bay Area (flight journal here). Saturday night I went to the Strikeforce Heavyweight Grand Prix. Sunday I went to the Maker Faire and then took a flight on a B-17.. now I feel like I need a nap.

So, let’s start with the fight. Strikeforce is the little brother of the MMA world, trailing UFC in both attendance and influence. Many of its successful fighters have gone on to compete in UFC; not a few UFC fighters have stepped back down to Strikeforce, sort of like a baseball player might spend some time in the minors before returning to the show. We had great seats and got there about 10 minutes before the fights started– just long enough to grab an H-P Pavilion hot dog. (Note to self: skip the hot dog next time.) 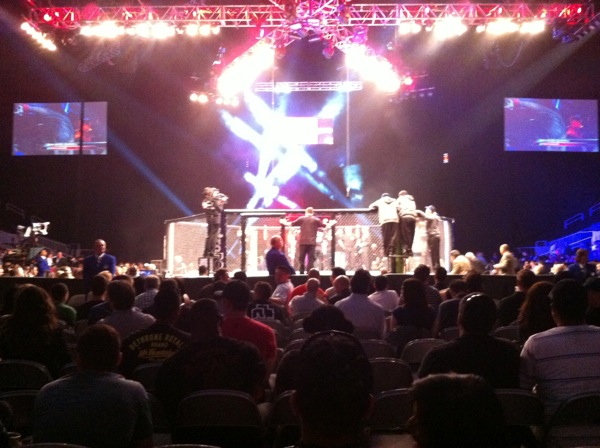 floor seats: 13 rows back, not too shabby. Not shown: enormous overhead video screen.

There were a total of four fights scheduled. The first two were both over very quickly: one by knockout, one by submission. The third fight is when things started getting interesting; it pitted Josh Thomson against Gilbert Melendez. Both fighters are from the Bay Area, but the crowd was clearly favoring Melendez. However, a funny thing happened as the fight progressed: Thomson seemed to be winning. He was connecting with Melendez better, to the point where Melendez’s face was showing a lot of wear and tear. Melendez was also clearly not in the same physical condition as Thomson. However, at the end of the fight, the judges gave a 2-1 split decision to Melendez– and I say “gave” because that’s sure what it looked like. Booing ensued. In a classy move, though, when Thomson was interviewed ringside the first thing he said was basically “don’t boo Gilbert; it was a good fight and he’s a good fighter.” Very classy. (See the official summary here.)

The main event was Josh Barnett, a former professional wrestler,  versus Daniel Cormier, a former Olympian. As soon as I saw that Cormier is from Lafayette, I knew who to root for. The fight started fairly slowly. Both of the fighters were above their ideal fighting weight by at least 20 lbs; there was a lot of flailing and bouncing flab but about the middle of the second round, Cormier started landing more punches. His advantage increased to the point that by the end of the fourth round he was clearly trying not to lose, no longer pressing to put Barnett out (though Barnett very nearly got him in a leg lock.) Cormier won a unanimous decision, as he should have; he clearly outfought and outpointed Barnett. (See official summary here.)

Now, about the Maker Faire: I guess the most appropriate adjective I can think of is “overstimulating.” Fire! Robots! Microcontrollers! Arts and crafts! Lots of people! I saw some very cool stuff; I also saw some things that made me think “well, all right, I guess some people are into that sort of thing.” I’m not particular artsy or creative so much of the artsy-creative stuff was wasted on me. However, I did take pictures of some excellent apparatuses of various kinds, to wit:

clearly a case of truth in labeling: this guy is obviously a giant cardboard robot

this little girl ran right up to R2-D2 and gave him (it?) a huge hug, after which he started beeping and rolling around

these are actually electric vehicles, but oh, so delicious… 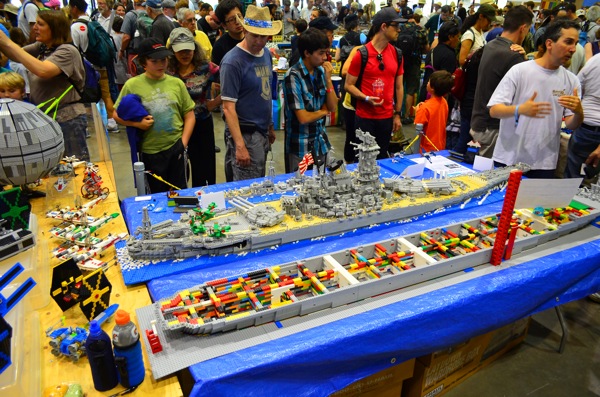 I couldn’t get close enough to get a picture of the LEGO Kermit the Frog holding a banjo that was off to the left, which is a real pity

if I had a garden, I would have bought several of these guys. Maybe next year.

a Dalek you can ride in 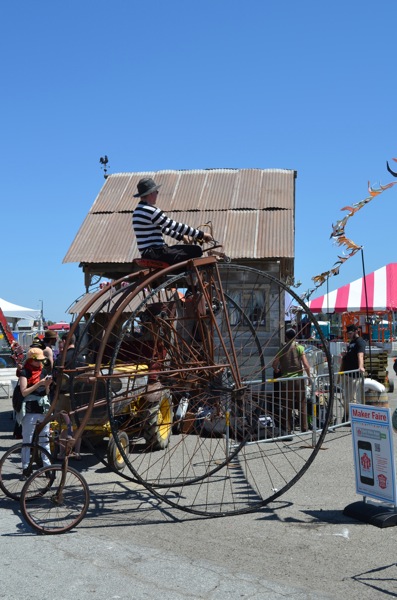 a bike you could ride, maybe