The boys and I are just back from a wonderful trip to South Louisiana for a mini-family reunion. Missie started the ball rolling a few months ago, so I made precautionary hotel reservations just in case. Things worked out beautifully– the boys had Friday and Monday off, so I picked them up in Montgomery Thursday night, and we stayed overnight in Mobile. Friday morning, we got up and drove to Houma; along the way we stopped at the National World War II Museum. I’d been there before, but the boys hadn’t, and they were pretty much wide-eyed throughout the entire tour. A stop in Luling for a shrimp poboy, and poof! we were in Houma.

That night we went to the Krewe of Aphrodite parade. In case you hadn’t guessed, this krewe’s court is all-female, and all the floats were crewed by women. I’m not sure if that was a factor in the boys’ massive haul of beads, but it could have been. We all had a grand time; we then joined Doug, Shawn, Missie, Jody, and the girls for Mexican.

the boys ended up heavily laden with beads, plus all sorts of other random paraphernalia. 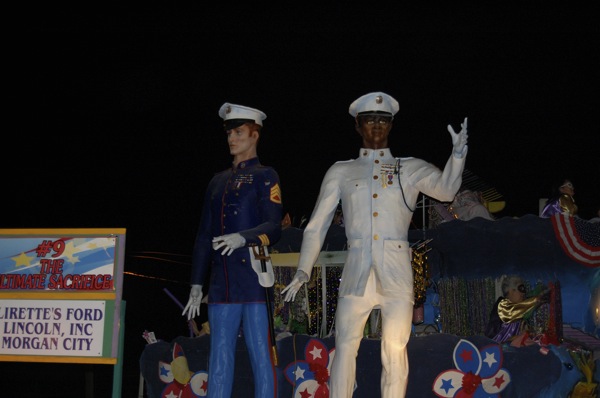 Saturday drove around to check out Houma, which has grown quite a bit since my last visit– to say nothing of how much it’s grown since I lived there. Terrebonne Parish as a whole had about 94,000 people in 1980, shortly before I moved away. The 2010 census says it now has around 112,000 people, but that seems low based on the size and bustle of what used to be a fairly quiet small town. We were supposed to marshal at Mr. Poboy (which I highly recommend), but we had some time to kill. I decided to drive out towards the airport, and what a good decision that turned out to be!

As we were driving, I saw what looked like a DC-3… then another one… then some other large propellor transport, all parked behind a hangar labeled “AIRBORNE SUPPORT.” We drove over to their hangar, and after a little poking around a gentleman (whose name, sadly, I didn’t write down) came out and offered us a tour of their operations. At first, he asked if we were with the media; I later learned that various media organizations were using shotgun mikes, pole-mounted cameras, and other surveillance devices to eavesdrop on their operations during cleanup of the BP Macondo oil spill. Once he was satisfied that we weren’t part of any sinister plots, he could not have been more helpful and friendly. I didn’t realize it at the time, but Airborne Support is a contractor that provides aerial spraying services to Clean Gulf Associates, an oil-industry-funded non-profit that maintains emergency response equipment and staff for spill cleanup. I’ll have to read up more on both of them when I have time.

The aircraft shown above is one of the DC-3s we saw (its web page is here.). More properly, it’s actually a C-47A, the military variant of the DC-3. This one was built in 1944 and is still flying! That’s not uncommon, as aircraft have a much longer life than most people realize. It’s fitted with a large tank that holds chemical dispersant; the spray plane flies at low altitude (30-50 feet above the water) and sprays in a pattern determined by a spotter plane flying at a higher altitude. The interior is bare-bones: there’s a big tank for the dispersant and that’s it. The cockpit below is mostly original, too, with the addition of a Garmin 530, some 1970s-vintage radios, and an overhead-mounted agricultural specialty GPS. The seats, yokes, and so on are all original, though.

After the tour, we joined the family at Mr. Poboy for an excellent meal. I had the fried shrimp poboy, which was served with excellent soft French bread. The shrimp were apparently fried in Zatarain’s, which is my go-to seasoning, and were plentiful and of good texture. (I wasn’t sold on the fries, though; our Luling gas station fries were better). Then we went over to Ricky’s house, where Ricky and Carey cooked up two huge pots of food: seafood gumbo and pastalaya respectively. Both were superb, as was the lemon icebox pie that someone made (I’m not sure who, but it was certainly good).

Carey’s pastalaya pot is almost, but not quite, big enough to cook a small child in. Sadly you can’t see Ricky’s epic two-burner cooking stand but it was busy too.

One of the things I love about visiting my family is that it’s a given that all the men can cook well. I am by far the worst male cook in my family, but I’m working on it!

We stayed at Ricky’s until well after dark; the steady, heavy rain didn’t dampen our spirits, although it did force cancellation of the scheduled parades. We were too full to care, however. Sunday morning we had breakfast en masse at Waffle House, conveniently located next to our hotel, then went in search of another parade– this one the Krewe of Terraneans. We stayed for the first four or five floats, then headed west for A Cajun Man’s Swamp Tour, run by Black Guidry. I’d taken the boys on it before several years ago, and I don’t think Black’s jokes have changed much since then, but we got some great looks at wildlife, including turtles, young alligators, and nutria. The weather had cleared by the time we left the dock and it was clear, sunny, and very pleasant out on the water. 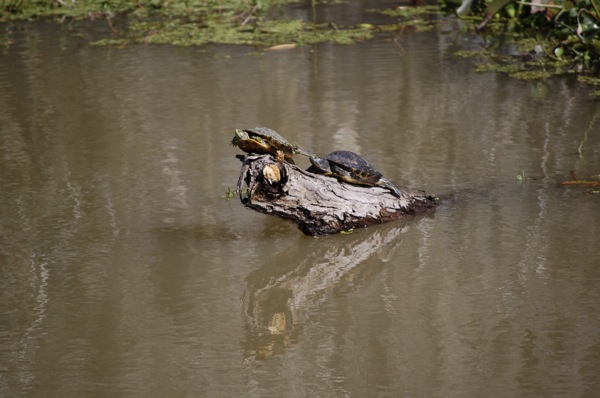 A third turtle decamped the log just as I was pressing the shutter button.

He looks pretty comfortable, doesn’t he?

Sunday night we had dinner at Boudreau & Thibodeaux’s in Houma. The food was excellent, and the wait staff did their best to feed all 30 of us in a reasonable amount of time. I had some delicious grilled catfish and a small number of Tom’s two pounds of crawfish. He certainly did them justice, as you can see in the before-and-after pictures below.

Monday all we did was drive back: Houma to Montgomery for me to drop the boys off, then back to Pensacola: just under 500 statute miles all told. Great trip, and we’re all looking forward to doing it again next year!