I woke up at 0300. Not on purpose; sometimes that just happens. I couldn’t go back to sleep because I was so excited. I was going to fly a jet transport, I thought. Is it time to go yet? The time passed faster than I expected, and soon I was in my rental car (Dodge Avenger; underpowered and buzzy; smelled like a porta-john) headed for JetBlue University.

the place looks a bit different in the early dawn: welcoming and yet a bit foreboding

Our syllabus for the morning was simple: each of us would fly four takeoffs and four landings around the pattern at MCO: two from the captain’s seat on the left and two as the first officer (FO).  The first takeoff would be with a warmed-up airplane positioned at the end of runway 36L; we would take off, fly an instrument approach to runway 36R (as shown below), do a touch-and-go, then circle back and shoot the approach to 36R again, this time landing to a full stop. 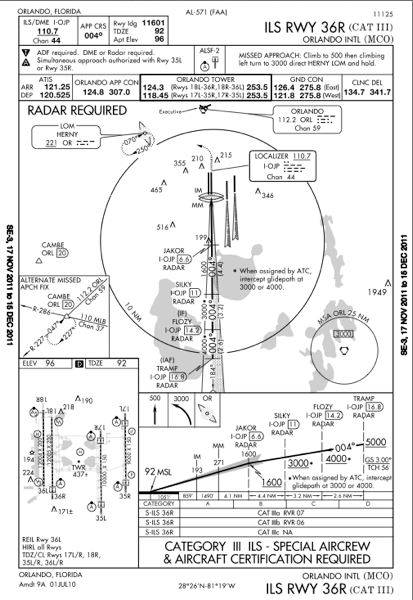 Do you know what all this stuff means? Yeah, me neither.

jetBlue, like most other commercial air carriers, has a distinct policy about who does what in the cockpit, but it’s actually not broken down into captain/first officer. Instead, there’s a pilot flying (PF) and a pilot monitoring (PM). The PM (often, but not always, the FO) handles radio calls and checklist items, while the PF actually flies the plane. The PM is in charge of things like calling out airspeed and altitude milestones, plus executing tasks the captain sets for him. For example, the PM’s job is to call out when the aircraft has reached its rotation speed– the speed at which it can be lifted off the runway. Once the aircraft is aloft, the captain may direct the PM to do things like adjust the wing flaps, retract the gear, and so on. We kept it simple; the captain would fly and the FO would be the PM. That meant I’d get two hops in: one paired with Dexter and the other paired with Steve. We’d also briefed having one other crew in the cab with us as observers; the other three pilots would be outside watching the training videos required for our high-altitude endorsement.

Blue Simsation, here we come (FFS stands for “full flight simulator”, not the other FFS)

First we met in a briefing room; each sim has one. Real jetBlue crews meet here to go over their flight plan and brief weather, routes, and so on. We used it as a place to hang out while we exchanged crews. The actual simulator cab can accommodate at least seven people; at one point we had one crew flying, one crew observing, two instructors, and one guy who didn’t get out before the simulator’s motion controls were activated (at which point the drawbridge goes up and you can’t easily leave.)

Then it was time to board the sim. As I mentioned in yesterday’s post, it looks exactly like an A320 cockpit (with a few minor exceptions, like the console that the instructor uses to position the plane, cause failures, and so on.) I was too excited to remember to take a picture of the empty cab so you could see what it looked like with people in it.

I don’t remember in what order we flew, and I’m sure . I do remember the sensations and sights of flying the A320 sim, though, and I will remember them until I die. The visual presentation is incredibly accurate, as are the motion cues. When you line up on the departure runway and advance the throttles, what you see, hear, and feel is as close to the real thing as you can imagine. In the picture below you can clearly see that the sun is beginning to rise in the east, and that it’s a relatively clear Florida morning.

Thanos and Adam flying into a dawn sky

This shot is a little blurry because I had the flash turned off, but it shows what Thanos’ approach to the runway looked like. 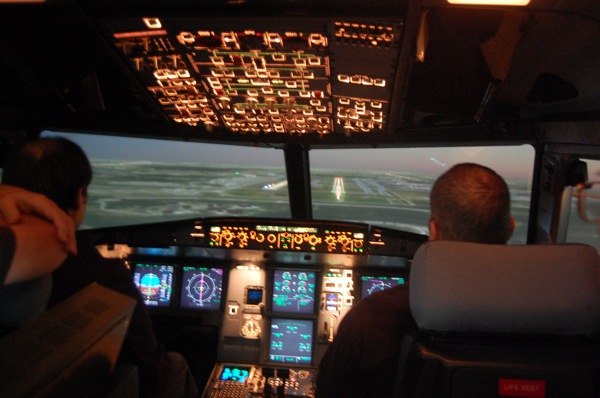 For my first leg, I flew as PM with Dexter as the PF. As you can see from the video I will post soon (as soon as I edit out all the pauses), he did a very creditable job despite me missing a few radio calls. One thing that the video doesn’t capture well is that we occasionally had to pause the simulator to figure out why the airplane was doing something we didn’t expect. This was almost always the result of either the PM or PF failing to push a button or change modes on the flight management system (FMS). As Phil explained, flying as an airline pilot is as much about managing, programming, and monitoring the FMS as it is about airmanship. In the A320 (and its bigger siblings the A330 and A340 as well), if you have the FMS correctly programmed with your flight plan, Fifi will do much of the work for you, including tuning the navigation radios, locating and capturing the instrument landing system (ILS) navigation markers, and generally helping you focus on the big picture of safely flying the plane by taking away many of the minutiae.

Flying as PM was fun, but being the actual pilot of this beast was something else altogether. This was the coolest thing I’ve ever done in my whole life: flying a 169,000lb aircraft at speeds just under 250 knots is not something most people will ever get to do, even when it’s simulated. My first landing was decent, my second was superb, my third was mediocre (stupid crosswinds!), and my fourth was decent. All were exhilarating, though. There are many, many differences in systems and control behavior between the lowly Cessna 172 I normally fly and the A320, but the same skills apply to both: precise control movements, attention to detail, and a feel for what the aircraft is doing. Of course, it didn’t hurt that I had two very experienced instructors with me!

I have to give props to Adam and John, who I would say flew the two best approaches and landings. John had to deal with an APU fire on one approach, followed by terrible weather on the next two, while Adam (if I remember correctly) did the best job of planting Fifi right on the runway centerline, crosswinds notwithstanding.

For the last landing of the day, Wayne and Phil set Steve up for a category IIIB autolanding. In this mode, the aircraft can navigate to touchdown entirely by itself, including reducing thrust and applying brakes after landing. Wayne set us up with a very low cloud ceiling, and Steve engaged the autopilot and armed it for approach mode. We then watched nervously as Fifi executed a flawless ILS approach and landing. This video shows an actual cat-IIIB approach in an A320, and you’ll notice that a) you can’t see anything outside and b) it’s very hard to spot any differences between the sim and the actual aircraft.

Overall the ATOP experience was superb. I had a great time, met some interesting people, and learned an incredible amount about the A320, with which I am now completely infatuated. I think one look at the big stupid grin on my face below says it all: