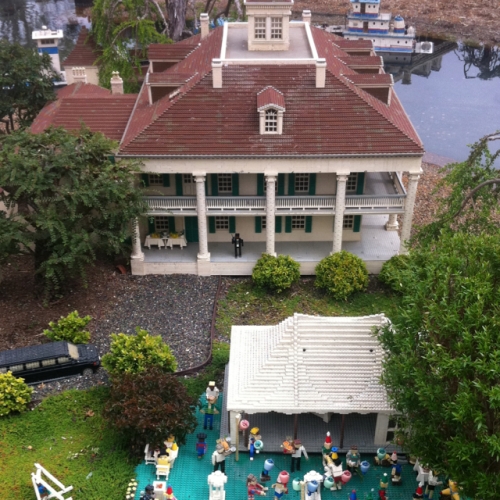 We drove down from Morgan Hill on Friday, taking the I-5 route. Because of construction at CA-58, we were a bit delayed en route, so we stopped overnight at the Rodeway Inn in Castaic, CA. It was a bit dingy, but given that we arrived after midnight I was prepared to relax my standards a bit.

Saturday morning we got up bright and early and made a beeline for Legoland. We arrived shortly after the park opened, and it was surprisingly crowded. Legoland’s crowd skews pretty young; there were lots of under-6-year-olds.

Our first stop was the aquarium. We’re undoubtedly spoiled, but I found it mediocre. Had it not been included in our ticket price I might have been disappointed.

The park, however, was well worth the price of admission. The models are jaw-dropping (see my Flickr stream for a few examples from Miniland, the model city area.) The rides are clever and well-designed, although the lines were long because there’s no equivalent to Disney’s FastPass system.

The boys’ favorite was probably the large, well-appointed water park. I sat in the sun and relaxed while they shivered in the water and claimed that they weren’t cold (the lazy river’s heated, however.)

A note about Legoland food: mediocre and expensive. Take your own if you can.

We closed the joint down, which was easy given that it closes at 6. Our hotel, Carlsbad by the Sea, was delightful; clean, beautifully landscaped, and well located. Breakfast the next morning was included, too, always a plus.

I’m posting this from iBlogger on my phone, so this update is too short to capture the full flavor. Suffice it to say that I highly recommend Legoland.

[Posted with iBlogger from my iPhone]