Training Tuesday: time to work on my bike repair skills

Warning: this post contains disturbing images of graphic violence that may not be suitable for some viewers. Viewer discretion is advised.

This weekend, Dana and I had planned to go for a bike ride on the Arsenal, so I loaded up my bike. First, though, we’d planned to go see Wonder Woman (which I highly recommend– great flick). Because I didn’t want to have my bike stolen by some miscreant, I secured it to the rack with a cable lock.

After we left the theater, I heard a thump and looked out my rear view mirror just in time to see my poor bike departing its slot in the rack, where it was dragged along for 50yds or so by the cable lock until I could safely pull over.

Dana is not amused.

The first thing I noticed was that I’m going to need new handlebars (and bar tape, which I wanted to replace anyway). 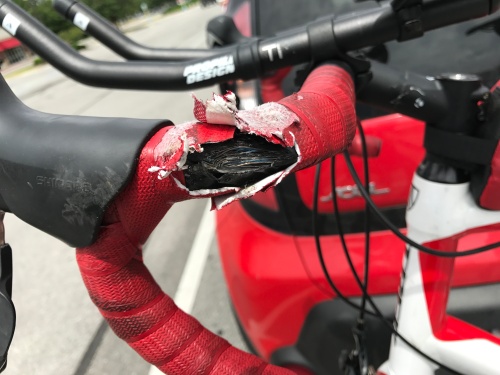 Ever wonder what carbon fiber looks like on the inside? Now you know.

The front tire sidewall was abraded enough to ruin the tire, and the corner of the saddle got chewed up pretty badly too. I think I can duct tape this as a temporary fix. 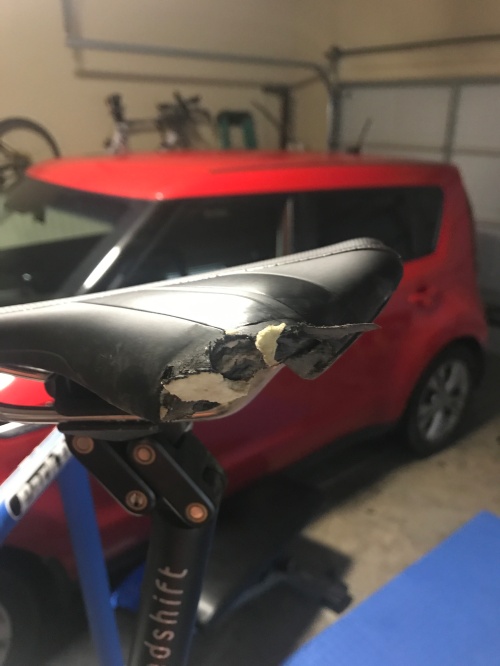 The retaining strap that I used to secure the wheel to the rack slot was missing. My best guess? Someone wanted to steal the bike, lifted the top clamp, and then gave up when they found the cable lock in place. I didn’t check the rack so I didn’t notice until it was too late. Thankfully the frame and the carbon wheel fairings seem undamaged, although the rear freehub is making a new noise I don’t like. Bar tape is en route from Amazon and mi amigo Lance is giving me a spare set of bars, so hopefully this weekend I can watch enough YouTube videos to learn how to disassemble my brake hoods and shifters, port them to the new bars, and wrap everything.

Meanwhile, I still don’t have a saddle for my tri bike, so I either better get to Bicycle Cove and spend some money or swap out running for riding for the next week or two…

2 responses to “Training Tuesday: time to work on my bike repair skills”