GATTS day 4: all sorts of approaches, plus “Lady Liberty”

I’m writing this recap a few days behind, and by now honestly lots of the flying is a blur– so I may have missed a few details here and there. Feel free to request a refund of your purchase price.

Day 4 started in the airplane, and whew. We flew arcs on the VOR-A at Emporia, then went to El Dorado, Kansas (which I never even knew existed) for fuel and an ILS approach. The airport there is named for Jack Thomas, a Marine fighter ace in World War II, and there is a nifty commemorative plaque. I hope he wasn’t watching, because I flew clumsily and nearly blew the approach. It didn’t help that on final approach I was distracted by a loud beeping; our backup radio was picking up a nearby emergency locator transmitter (ELT) that someone had accidentally triggered. Peter suggested that perhaps Captain Thomas’ ghost had affected my approach. Maybe he’s right….

When we left, our next stop was Hutchinson, where we flew the localizer backcourse (LOC BC) approach to runway 31. In a previous entry, I mentioned that an ILS provides precision lateral and vertical guidance; the lateral component is based on a radio transmitter known as the localizer. It transmits a narrow beam aligned with the runway centerline.. but it can broadcast in both directions. Hutchinson is a great example: the localizer on runway 13 is used for the ILS 13 and for the LOC BC 31. The difference: when you fly the backcourse, is that the course deviation indicator (CDI) is backwards! It’s still showing your lateral deviation from the runway centerline, but its direction is reversed than it would be on the front course. So instead of turning right when the needle is to the right of center, you turn left. This is wicked confusing until you get used to it. Having the GPS in map mode helps a lot because you get a good picture of the correct track to the localizer line.

After a pretty good landing at Hutchinson, we ate at the Airport Steakhouse. Sadly, there was no steak, but the buffet was decent. Right next to the main building, there’s a large repair shop, Midwest Malibu, that specializes in Piper Malibu, Meridian, and Mirage aircraft– very pretty, multi-million dollar birds. We walked over and had a quick tour, which was neat; I always like seeing the guts of interesting machinery. The highlight of the stop in Hutchinson for me was seeing Lady Liberty, the A-26 bomber flown by the Commemorative Air Force. She had an engine failure on final approach, so the picture below was carefully framed not to show the side with the missing engine. 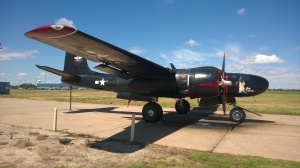 When we left Hutchinson, our next stop was Marshall Army Air Field, part of Fort Riley. We didn’t stop there, of course; instead, we flew what’s known as a precision approach radar (PAR) approach. In a PAR approach, the controller gives you continuous verbal guidance on which way to fly and how your lateral and vertical alignment is holding up. You don’t acknowledge the controller, you just apply course corrections based on what he tells you. It’s both harder and easier than it sounds, but it was neat to do it. Civilian air traffic controllers can conduct similar approaches, but PAR approaches are unique to the military. Then it was back to Manhattan and the GPS for runway 21.

In the afternoon classroom session, we switched gears and moved to a different simulator, this one based on the Garmin G1000. I was familiar with the G1000 for VFR flying, but I hadn’t used it for IFR approaches before. The combination of the G1000 and the GFC700 autopilot is capable of flying a complete approach all the way to landing. Not that we did that, of course, but I did fly a couple of practice approaches into Alexandria, something that will come in handy when I go visit. Today’s classroom topics included more on currency, the start of a few days’ worth of discussions on weather, and coverage of the conditions under which you must designate an alternate airport as part of your flight plan (basically, if the weather at your destination airport is below a certain set of minimums, you have to pick an alternate and make sure you have enough fuel to get there). 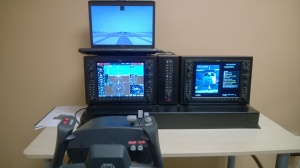 After such a long day, I was pretty tired, so I went back to the apartment, read for a bit, and then headed out to find the Kansas State University rec center, where I’d read that there was a lap pool. Long story short: nope, it’s in another building (the Natatorium), but I eventually found it, got in the water about 845pm, and swam 800m, a new distance record. Then it was home for a turkey sandwich and a good night’s sleep. Luckily I wasn’t further troubled by ghosts.