It’s a measure of how much I’ve been working that I am just now getting around to posting a travelogue from last Sunday. This week has passed by in a blitz of activity, which is good. My team has gotten a lot accomplished, which, after all, is what we came here for. But before all the work started, I had the pleasure of having a day to explore.

I’d planned to meet my coworkers Todd and Dave at the hotel after their flight arrived, then drive to Valparaiso with fellow MVP and well-known Chilean Jorge Patricio Diaz Guzman. Unfortunately, Jorge had a work emergency to tend to, so I kept the rental car I’d gotten on Saturday. I rented through the hotel by asking the concierge to find me a rental car, because this seemed to be the fastest way to get a car. Sure enough, within 20 minutes or so Maxima had delivered a car to the hotel: a tiny Chevy Spark with a manual transmission and almost enough room for 3 adults. (It has 4 seats but it is wishful thinking to imagine that four normal-sized American men could fit into it; luckily we only had 3 people.)

they see me rollin’, they be laughin’

After Dave and Todd arrived and had a few minutes to unpack and freshen up, we set out for Valparaiso. The route to get there is very straightforward: get on highway 68 going west and keep going for 120 km or so until you hit the ocean. It’s a lovely drive, with two large tunnels and some long up- and downhill grades that our car could barely handle. The speed limit ranges from 70 km/h to 120 km/h, but no one except American tourists and people in underpowered cars like hours follow it, especially not big trucks. We made it to Valparaiso but decided, since none of us had any firm plans to do anything there, to go back to a restaurant Todd knew of in Concon, another 20 or so km down the coast. The weather was pleasant and there were great views along the coast, so off we went, braving significant traffic along the way. Both sides of the narrow coastal road are packed with restaurants, shops, and rental property but there is little parking, so we spent lots of time waiting while other drivers maneuvered in or out of parking spaces. We also made frequent stops for photos, both on the route out and back.

Eventually we made it to the restaurant Todd had recommended, Punta del Este. It was well worth the trip– think Dave’s Cajun Kitchen, or your favorite hometown restaurant for those of you who aren’t from Houma, and you’ll get the idea. We had an appetizer platter of razor clams, conger eel, and several kinds of fish. I had tilapia with shrimp sauce, which was also excellent. Then we drove back, stopping at a few different places to take pictures; there was one gorgeous house that Dave was particularly smitten with. 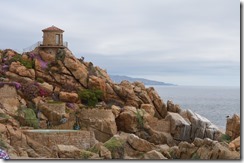 On the way back we needed gas, so we stopped at a highway rest stop that would be familiar to anyone who’s ever traveled the New York or Ohio Turnpikes. Fuel here is expensive, but at least you get full service at the station in exchange for your hard-earned CLP$. After returning the car (a simple matter of giving the keys back to the concierge), we walked over to Costanera Center, the nearby mall, to find dinner. We had an excellent meal at Le Due Torri, an Italian-and-seafood place that delivered very well on both fronts, then back to the hotel. e were all pretty worn out by that point but it was an interesting way to spend the day. I’d love to come back to the Vina del Mar/Concon area during the Chilean summer; the views are gorgeous.